Will Zou Shiming Be Set Free to Go Into Pro Boxing? 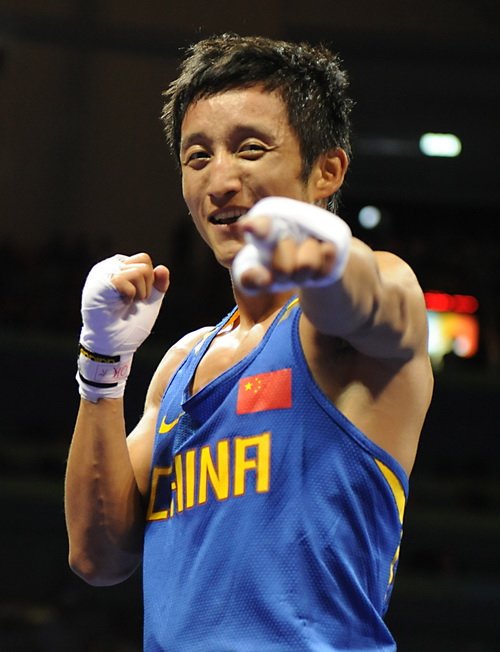 Today we noticed an interesting piece from Reuters via Universal Sports about Zou Shiming, China’s first-ever Olympic boxing champion. From the article it seems the 27-year-old boxer is pretty determined to turn pro next year. “I want a professional golden belt for my country. I think I am capable,” said the boxer, “The professional contests are easier and more attractive to watch.”

After winning the light-fly weight champion in the Beijing Games, Zou has been consistently linked by Chinese media with Don King, the world renowned boxing promoter who is to stage a WBC heavyweight title match in Chengdu, Sichuan Province on November 7. Rumor has it that Don will likely sign Zou for $1 million USD. In an interview with Chutian Metropolis Daily (楚天都市报) yesterday, a spokesperson of Don King Productions Inc. told press that they’re paying close attention to Zou Shiming and Zhang Xiaoping, the light heavy weight champion in Beijing Olympics. “We’ll come to China more often to watch their matches, and will consider signing them if possible,” said the King spokesperson.

In boxing, when an amateur boxer goes pro, he or she would be able to participate in professional matches organized by World Boxing Association, World Boxing Organization, World Boxing Council and International Boxing Federation, but meanwhile can’t go back to play in either the Olympic Games or matches organized by the Amateur Boxing Association(AIBA). In other words, Zou Shiming can’t be like Yao Ming or Liu Xiang, winning top gold and achieving Olympic dreams for the Chinese at the same time. He got to make a call whether or not to end his Olympic road. Or will he even be allowed make the decision for himself?

Born in 1981, Zou began receiving boxing training in Zunyi Sports School (遵义体校) in Guizhou Province when he was 15. He was chosen to train in China’s National Boxing Team three years later. That means Zou has been supported by the country’s central planning whole-nation or juguo (举国) sports regime for 13 years until now, and getting stipends for about 11 years, bonuses not included. Going pro next year would definitely raise Zou’s income a lot, but can also make him a sinner at home. Ask Wang Zhizhi, the basketball player in China’s army team, and he can tell you how hard it takes to go against the officials. The then Los Angeles Clippers center was once labeled as a traitor by Chinese media.

Chang Jianping, AIBA vice-president and president of the Chinese Boxing Association (中国拳击协会), said in an interview yesterday that AIBA is to have their own pro league – the World League of Boxing(WLB). Though also tagged ‘pro’, we presume incomes the athletes can receive will to some extent fall short of their expectations. The news may almost ruin Don’s shot to get Zou for now, as the 27-year-old is expected to win another gold for China in the 2012 London Olympics.

“I think the WLB will be a very good choice for top boxers like Zou,” noted Chang, “They can participate in a pro league and don’t have to miss out the Olympics in the meantime. Zou will become more valuable in the future if he continues this trend.” Aside from Zou’s form, the trend Mr. Chang meant here is keeping representing China in the Olympics. Unless there’s some other players can compete with Zou’s profile, obviously the Chinese Boxing Association will not let him go easily. But either way, Zou’ll get to play in pro games soon.