Building Snowboarding from the Peak Down 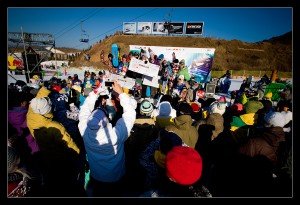 “Snowboarding in China is never going to be the way it is in Europe or the United States,” says Steve Zdarsky, the man who runs Mellow Constructions in China. “Every year I say snowboarding is going to take off, but not too many kids start this sport every year. China is more like Russia, where only the wealthy can afford to do a sport like this.”

There is a hint of bitterness in Zdarsky’s voice despite the optimism he and the others who run the Quiksilver Nanshan Mellow Park, a ski resort about 40 minutes north of Beijing, have for snowboarding in the People’s Republic.

It’s not that they’re tired of their jobs, far from it. But after seven years of Nanshan, Zdarsky seems disappointed that snowboarding is not where he wants it to be in China. If it weren’t for Zdarsky and his team, snowboarding would not be anywhere close in popularity to where the sport is right now. The group is synonymous with the dissemination of the sport within the mainland.

But what happens after hosting seven Nanshan Open competitions — the latest incarnation and most successful to date that took place January 10 – 11, featured 20 internationally known riders and four Chinese competitors and gave away $25,000 USD in prize money — produces progressive results for the sport, but does not increase the number of lift tickets sold?

“Sooner or later I am done here because no one ever says thanks for this,” says Zdarsky. “As soon as it becomes a job, I am out. But right now, I love this. I am doing what I love to do.”

One could say Zdarsky is at a crossroads, but unwilling to surrender. He says the group has tried everything they could muster together to get snowboarding more recognized in China. 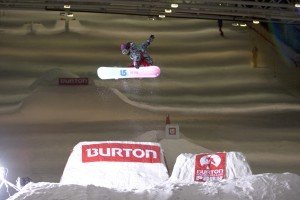 A rider hits one of the kickers at the Burton Qiaobo Park, the indoor facility the Mellow Parks crew heads to during the summer months.

The group currently has three parks around the country. They’re planning to open a second park in Miyun for 2009, just a few kilometers down the road from Nanshan. When Nanshan dusts off the snow for the summer, the group moves to its Burton Qiaobo Mellow Park, an indoor facility in Shunyi. They’re the only snowboarding group in the world that can claim to have both Burton and Quiksilver sponsorship — arguably the two biggest brand names in the sport. Every weekend during the winter months that Nanshan is open, the group hosts Fat Saturdays, a chance for free demonstrations for non-riders and tons of merchandise to give away. They threw together the Mellow Park tour one year that saw snowboarding in Shanghai, Hebei and Beijing in an effort to bring the sport to a wider audience.

It is mind-boggling just how intertwined snowboarding and Nanshan could possibly be, but every year they manage to take it a step further.

How Nanshan Came to Be

Zdarsky began studying Chinese in Shandong at the university, and on his time off from school he would head to Yabuli Ski Resort. When he first offered his services as a snowboarding instructor, Zdarsky says the instructors at Yabuli had never even heard of snowboarding. By 2000, he was teaching large groups on how to ride.

After he was introduced to someone who said Zdarsky should check out Nanshan, the ski resort offered to pay his school tuition if he would build snowboarding at Nanshan. His first season at the park he was instructing former ski instructors how to teach snowboarding, even making a manual of all the snowboarding terms converted into Mandarin.

When the Nanshan Open first started, it was a group of five snowboarders messing around in the park, and Zdarsky jokes that the grand prize that year was a can of beer. Jump seven years, and the Nanshan Open has grown into China’s largest snowboarding event. And it is the Nanshan Open that has been one of the biggest catapults of the sport in China.

“Five years ago, Nokia was the first big sponsor of the Nanshan Open,” says Zdarsky. “When Nokia cam on board, the event got much bigger. We started getting more international riders.”

Snickers began sponsoring the event for the fourth Open, but over the past three years it has been Red Bull as Nanshan’s main sponsor. Additionally, the Nanshan Open hooked up with Swatch Ticket to Ride, which connects the most prestigious independent snowboarding events around the world, bringing more international recognition for boarding in the Far East.

To Build a Park 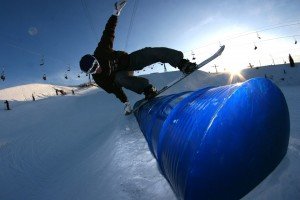 Riding one of the obstacles at Nanshan.

“Making the park is the easy part,” says Zdarsky. “It is maintenance that is the trick. Every ski resort in China can do a park if it wants to.”

Zdarsky hooked up with an old friend from back home who had created Mellow Constructions, a company that specializes in building snowboarding parks. Now Zdarsky and company are the go-to people to build parks in the People’s Republic.

“When you are building a park, you have in your head what you want to do, and then it is just a matter of translating it over to the real thing,” says Zdarsky.

The current park at Nanshan consists of two kickers — larger mountains where riders hit ramps to perform tricks while coming down hill — that are actually made from dirt, as the resort uses fake snow. The kickers were redesigned three years ago. There is also an 80-meter, hand-shaped half pipe, and several other boxes for riders to perform tricks on. The other, smaller contraptions scattered about the course will get changed every two weeks.

Landing the Next Trick

“I was just here to learn Chinese,” says Zdarsky. “I thought I was going to be back home after two years.”

While Zdarsky sees all his friends back home getting married or having kids, he’s still hitting the slopes with his team. From day one, Zdarsky aligned himself with Chinese snowboarder Marco Huang. Three winters ago, Olli Fenwick-Ross, the current head of public relations and media for Nanshan, got on board. Additionally, Nanshan has a group of core Chinese riders who show up daily in the winter months to help shape the course in exchange for free lift tickets or gear. It is a small group that has made snowboarding something in China.

But where do Zdarsky and the others go from here? How do they land the next trick and push Nanshan to even bigger fame, or snowboarding to a higher plane? And is that even the name of the game? A big part of snowboarding’s future in China is completely out of Zdarsky’s hands.

Zdarsky says he thinks the Winter Olympics will be a huge boost for snowboarding in China given the Chinese National team’s training regime.

“Like every sport in China it needs a hero,” says Zdarsky. “With the Winter Olympics in Vancouver next year, and the Chinese national snowboarding team getting better, should they bring home a medal that will be huge for the sport.”

Zdarsky is confident the team will exceed expectations given that he says they’re training seriously every day — and even use Mellow Park’s summer course to continue during the warmer months.

“At the end of the day, if it is just us pushing snowboarding, it is not going to work,” says Zdarsky.