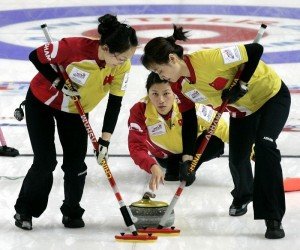 Supported by the country’s juguo or whole-nation sports regime, China women’s curling team was established in 2001 and is now coached by Canadian Daniel Rafael, who’s also the head coach of China men’s curling team. The five team members, who together crowned Winter Universiade last month in Harbin, are all from Harbin Institute of Sports(哈尔滨体育学院), and have been receiving full-time training mostly in Canada and European countries, a predominant advantage compared with their fellow competitors.