Olympic Trampoline Champion Hints At Match-fixing in the National Games 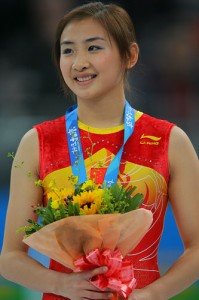 A misstep cost He Wenna (何雯娜), China’s first trampoline Olympic champion, 0.9 point in the final, ranking 5th by the end. And Zhong Xingping (钟杏平), an athlete from Guangdong team, won the champion. But He’s words after the final made one think that match-fixing at the 11th National Games is rampant.

Below’s an excerpt of an article from today’s Information Times (信息时报):

“I’m not surprised by the result,” said He, when asked about the defeat. “It’s dafen xiangmu (打分项目), a sport whose result is rated by the judges, so that’s that. I knew who would win this gold.” A reporter asked her to elaborate what she meant by dafen xiangmu, “you know what it is,” He replied.

He Wenna expressed disappointment about Fujian team’s loss.  “…but something is fated long ago. It is what it is. It’s okay because [I or Fujian Province] already got a gold in the Olympics. And [I or we] don’t need this medal at the National Games.”

Check out the following video from Youku to see what the Olympic champion got for us after the match (in Chinese):