Catch Me If You Can, Says the Chinese Gymnastics Association (Update 1) 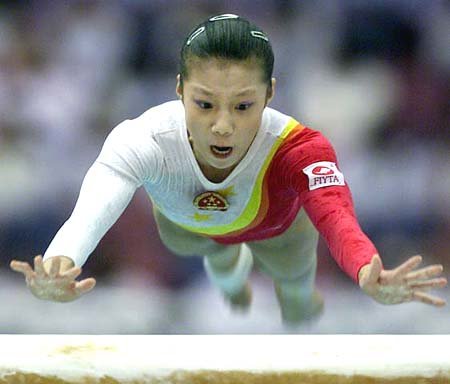 Dong competing in the Sydney Games

Five golds, two silvers and four bronzes – the performance of Chinese athletes at the Vancouver Games has been nothing but outstanding during the celebration of Chinese New Year. But back home, sports officials in Beijing are fumbling, as a bronze medal the Chinese gymnastic team won at the 2000 Sydney Olympics could be stripped soon.

As gymnastics officials may have helped Chinese athletes falsify birth documentations just like the football and basketball teams have been doing in the country, it looks they forgot to remind the players that they should keep lying.

The International Gymnastics Federation (FIG) posted their ruling last Saturday on its Web site. Excerpt below:

The Committee decided that in the case of Yang Yun the concrete and objective evidence available is insufficient to prove that the birth date indicated on the official documents was falsified. Ms. Yang Yun is awarded with a warning for the declaration she made during the interview with CCTV5. The only mention of age in this case was on a television interview. The costs of the disciplinary procedure are awarded to the Chinese Gymnastics Association.

Should the punishment be made by the International Olympic Committee, it can kind of prove that the Chinese gymnastic team lied to the world, also putting the results at the Beijing Games highly questionable. And now the Chinese Gymnastics Association claims the evidence held by the FIG is unconvincing.

“We believe that to date, there is no sufficient evidence to prove that there were problems with Dong Fangxiao’s age in 1999 and 2000, therefore we feel great regret toward the FIG’s punishment decision,” a staffer of the association said last Saturday and later put their statement on its Web site.

The whole thing left us with a comical situation that while there’s evidence suggests the players were under age when they competed in the Olympics, without reliable help from sports science, it seems these young ladies can never get caught by lying.

And the problem in China is, if the players do get caught here, like the CBA players we’vementioned earlier (also see here and here), they face little punishment according to China’s sports law.

Call me a pessimist, but unless the new licensing system implemented by the FIG is super cool, it looks very unlikely that the age fraud shall be gone from here soon. Let’s hope not to continue the talk after the London Games.

Update 1: In an interview with China Youth Daily, Luo Chaoyi, director of Gymnastics Administrative Center under the General Administration of Sport, the top governing body of Chinese sport, said the age of Dong Fangxiao is her personal matter and the fact that Dong’s age had been shifted 3 yrs younger after her retirement was Dong and her family’s own practice. (According to the FIG’s findings, Dong registered a birth date of January 20, 1983 at Sydney but when accredited to act as “secretary” at vault at the 2008 Beijing Games, had declared her birth date as January 23, 1986.)