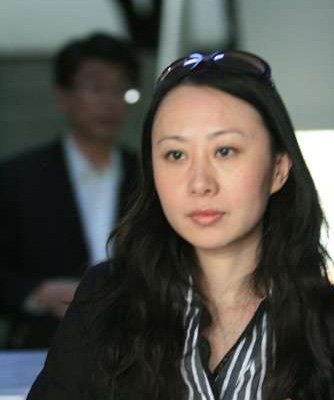 Lu You, sports journalist with CCTV

It’s my third time meeting Lu You this Monday at the gate of Beijing Second Intermediate People’s Court.  The result of her second trial against Huang Jianxiang, her former colleague at CCTV, a football commentator, was to be announced that day.  As the last two meetings with her, she seemed upbeat and spirited, like on the screen as a sports reporter.

The Lu You v. Huang Jianxiang case began with a piece Huang wrote on his Sina blog in June, 2008, which titled “Let’s say the ugly things up front.” In the blog post, Huang critised Ratomir Dujković, then headcoach of China’s national football team, ahead of a South Africa World Cup qualifier match with Qatar. Below are our translation of two paragraphs of the article.

You can play around as you wish, but better play it well and qualify. Otherwise, don’t blame me for settling a score with you afterwards. Even a god-like figure, your predecessor was bombarded by fans and media after conceding nine goals in the World Cup (refering to Bora Milutinović at the 2002 World Cup), let alone you didn’t make it outside of Asia. I didn’t say anything after China’s World Cup lost before, because there were so many people targeting him. Of course there’re people who tried to stir things up or follow others blindly, and also people who wanted to take vengeance for giving exclusive interivews to “zero distance”(refering to another female journalist). But I won’t be polite to you this time. I’m now self-employed and don’t need to represent the will of the leaders in my work unit or organ, and can fully enjoy the freedom of speech of Chinese football.

To be honest, you are far worse than your predecessor. He at least gave “zero distance” a good result, by not only [let her] enjoy wealth and rank and, until now, let her be an agent of any of his business cooperations in China. He did what was humanly possible and acted manly. What about you? [You] caused her an extra-uterine pregnancy and a scandal in the work unit, and you’re now faint-hearted. She was ousted as the top reporter who follows the national team and lost it all, making many fans wonder and miss her beautiful figure in the reporting of the national team. From this point alone, you’re far worse than your predecessor, are you?

At the time, most fans who closely followed the national team news knew who Huang was referring to in his article. Though Huang later deleted the  “extra-uterine pregnancy” part, it’s already too late for Lu. Hundreds if not thousands of netizens started leaving comments on Lu You’s blog, some of them using false language, describing her as a “bitch” or “stupid cunt,” some voiced their support of her, others considered both Lu You and Huang Jianxiang reaped “fame and attention” from the incident.

Later that year, Lu filed the case against Huang for defamation, because she thought she’s the person Huang mentioned in his blog post. She told press that her ultimate regret was that the case was not being heard in public. She lost the first trial on May 8, 2009 and appealed for a second trial on May 25, 2009. The second trial was started on Nov.20, 2009 and for some odd reason it protracted for over a year until now.

“It’s definitely not normal if a case’s been protracted for this long,” said Pu Zhiqiang, Lu’s main lawyer. “Legally speaking, judicial interpretation and General Principals of the Civil Law made it fairly clear about this situation, that if a third person presumes the person Huang mentioned was Lu You and caused a damage to her reputation, we can make sure that it’s this specific person [Huang referred to]. Other than this, we need to look at whether Huang’s words are based with evidence. He needs to prove that he wrote them unintentionally, which Huang failed to do.”

According to Mr.Pu, the key to this case is a contract between Huang Jianxiang and Sina, that Sina takes care of promoting Huang’s blog and Huang is responsible for writing eye-catching articles to attract more visitors to the site.

“During the first trial, Lu’s lawyer asked Chaoyang court for retriving the contract from Sina. But Sina said it cannot be provided because it involves commercial secrets,” said Pu. “Isn’t it contempt of court? The contract is held by both Huang and Sina. The court should order Huang to bring it out if Sina fails. If Huang declines, we should deduce the contract works to his disadvantage.”

“But the situation we encountered is the court considered it’s meaningless to look at the contract. They think the reputation dispute has nothing to do with Huang and Sina’s contract,” Pu Zhiqiang disclosed. “I think this [contract] has significant importance in deciding whether Huang [intentionally] damaged Lu’s reputation. I want to raise Lu’s case to the height of the New York Times Co. v. Sullivan case. I can prove the defendant’s actual malice in the case. But Chinese laws has no stipulation about the relations between public figures and actual malice.”

“This case is very helpful in standardizing citizens’ lives and behaviors in the Internet age. But the first trial verdict means that you can say anything about anyone without mentioning the person’s name. The whole world thinks [the person Huang mentioned] is Lu You and the court told her ‘you can’t prove it’s you.’ Isn’t this absurd?”

“Both Lu You and Huang Jianxiang are public figures. You can’t deny this person is not a public figure if he or she’s less known than another person. Lu You actually holds public resources when she covers Chinese football for CCTV. So it is reasonable if others think she has special channels to acquire information than other reporters. The key is people should say things based on their own judgements. If a contact for boosting your click-rate comes before, it’s way out of line.”

Outside the court, Lu You had a smile on her face and stamped on her feet against the cold.

“If I lose then let it be. Countries will keep submitting bids to host the World Cup even if they failed before. Even China has tried two times to be granted the opportunity to host the Olympics. Think about the “black whistle” England experienced in the South Africa World Cup (In China, “black whistle” refers to a referee who intentionally makes wrong judgements after taking bribes). It’s definitely unfair. But will them choose not to participate in the next World Cup?”

The court dismissed Lu You’s claim of defamation, considering the person Huang mentioned in his blog post was not her. But weirdly, the court verdict criticized Huang for his “misconduct,” an act that was described as “nonsensical” by lawyer Pu.

Lu You was calm during the process and smiled when the judge read the decision.

“I nerver read other verdict and it’s the first time that I know that the law can criticize someone,” said Lu. “But I think citizens do not hope it can only criticize people, but to be able to punish them. Laws are the bottom line of a society and if it fails to promote good and punish evil, I don’t really need to file the case.”

Lawyer Pu lit up a smoke outside the courtroom when Lu You said these words. He finished the cigarette, paced slowly into the room after Lu finished and told us “it’s good they let us use this room.”

“I first want to thank the judge Liu Haidong. He did everything he can about this case,” said Pu. “He made it clear that the court ruling is decided by collegiate panel and, more important, by ‘leaders’. We often say our country’s freedom of speech and press is limited. Huang Jianxiang can, in an age when freedom of speech is striding backwards,  wins outrageously in this case. I think it says he has something that excels. But this something does not benefit the rule of law of a civil society. We’re lost, but only temporarily. We will turn things over one day. So Huang Jianxiang will be Lu You’s defendent for life. This is also a case lawyer Fu Minrong (the other lawyer representing Lu You) and I will reverse for the rest of our lives.”

Lu You drove me back to Pu’s law firm where we first met each other last year, when my colleague and I bumped into her in an interview with Pu Zhiqiang for an anniversary story.

In the car, Lu was no longer restraint and turned very emotional at some point. She told me female reporters in the “sports circle” are a “rare breed” and often prejudiced. Before the South Arica World Cup, she was invited for an interview with QQ, Tencent’s news portal site. During the interview, Lu recalled, the Tencent journalist asked her if she would bring condom for the trip. And for a minute she didn’t know how to react.

“So in the end I told him that I won’t bring ‘that thing,’ as I think the interview woudn’t be presentable if answering it directly,” said Lu.

But QQ Sports made a splashy headline out of her answer anyway, which titled “South Africa Reporting Safe, I Don’t Have Condoms in My Pocket: Lu You.”

A few days before the court ruling was announced, lawyer Pu Zhiqiang posted a message on his micro-blog that read: “Lu You did experienced an extra-uterine pregnancy, but it’s unfortunate privacy only between her and her boyfriend and had nothing to do with Ratomir Dujković. In order to become more popular and make money, Huang Jianxing violated a female colleague’s privacy and fabricated a sex scandal out of her and Ratomir Dujković. Huang’s words and deeds constituted defamation according to the law.”

Update Dec.28: If you speak Chinese, go here to check a video interview Lu You, Pu Zhiqiang and Professor Xu Xun from China University of Political Science and Law, did with People’s Daily Online today.