Members of the Sea Dragons worked on tackling maneuvers, ball handling techniques and running drills. China’s first and only local all-Chinese American football team, comprised of primary school students in Shanghai, could have just as easily been going through a regular practice. But this time, the young football players were taking their queues from Ed Wang, the Buffalo Bills offensive lineman, and the only player in the NFL with full Chinese ancestry.

Wang has spent the past week traveling through Beijing and Shanghai as part of the NFL’s efforts to help educate local Chinese and expand its fan base throughout the country.

“I was expecting them to have an idea of how to play,” said Wang, after concluding a clinic at the Shanghai United International School, located in the southern part of the city. “But I am wholeheartedly impressed with just how knowledgeable they are about the different positions. The students I’ve seen enjoy the game, and they pick it up real quick.”

The 2010, fifth round draft pick says despite the fact that football seems like a foreign language to many Chinese, the primary school and university football players — the NFL has several college-level flag football teams in Beijing — he has spent time on the field with shows there is growing interest in the sport.

“They have the equipment and coaches here, China really needs more teams so they can compete,” he said. “I didn’t really start enjoying football until I was about 11-years-old. These kids are seven and eight years old. They are starting earlier. To come here and try and make an impact, it is great to see them respond so positively.”

Below are images from Wang’s clinic with the Sea Dragons (click on the images to see original sizes). 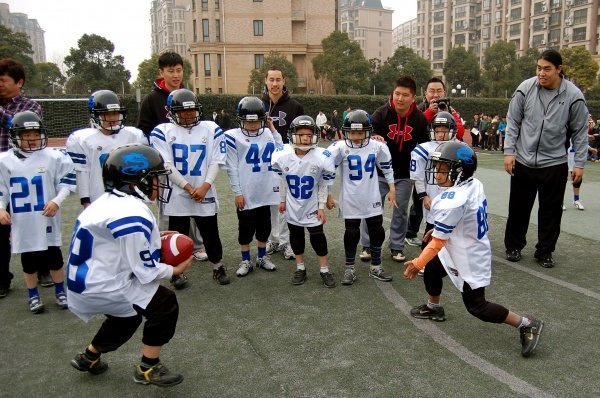