There’s a moment of awkwardness after Wang Zhizhi trying to reach out to the audience through his microphone. “Ni Men Jiu Shi Rong Yu,” the Bayi Rockets center shouted. It looked Wang, the first Chinese to have played in the NBA, knew too that what he was speaking was weird. The words basically mean “you are glory” in English. But when it get translated into Chinese, it took a moment for people to get it, as rarely did they hear someone says that. It sounded more like English but the big man was actually speaking in your language. My friend gave me an awkward laugh and blushed when Wang finished. And we both thought it was not his idea to say that. 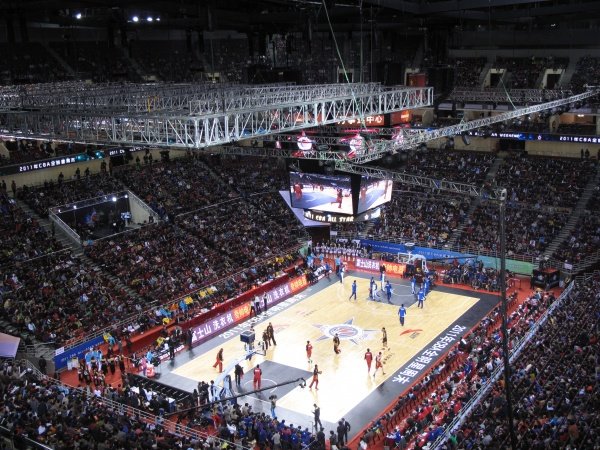 The awkwardness largely set the tone for the All-Star Game. It looked the organizers tried to reach the fans but failed for not trying enough. They have a beautiful stadium, the first NBA-style arena in China, and the All-Star Weekend is the first sports event after the Wukesong Sports Center reached the sponsorship deal with MasterCard. The fans at the MasterCard Center were excited in the beginning and mostly in the first two quarters. But some of them started to leave in the third and, by the end of the match, people around us were almost all gone. There’s something lost in-between and you feel the fans and the game were still disconnected.

They’re disconnected before entering the arena. No CBA merchandise or any related products were offered at the MasterCard Center except what you saw in the picture below. The products were cheap but the vendor said he actually had a great business in the Rookie Game Night on Saturday.

Unlicensed CBA posters, the best you can find in Wukesong. But are there licensed ones?

The opening was reminiscent of the Beijing Games when the rookies staged lip-syncing. And speaking of the rookies, they’re no better than the all stars in performance. The lack of talents made people started leaving after the 2nd quarter. I was told a majority of tickets on Saturday were given out free but can’t confirm if that’s true. The All-Star Game, as in previous seasons, were dominated by imported talents. And for last night it was more of a Quincy Douby vs.Stephon Marbury match. Most Chinese athletes seemed uninterested and somewhat out-of-place. It gave you the feeling that they’re not used to this idea of an All-Star Game or themselves participating in it, but many of them had at least 3+ years of playing in the All-Star.

It looks the CBA cares about its brand but does not know where to begin after 15 years of practices. It’s always easy to copy, but when the audience can taste the original flavor everyday at home, why buy the tickets to watch your games? The silver lining for the CBA guys’ that the stadium was half-full by the end of the 4th quarter. They got some fans, but not professional enough to keep them and make them happier.