A bit longer than I thought, hence I’m posting it in two parts. Read the 2nd part here.

At the beginning of April, a month ahead of ESPN’s 2011 X Games Asia in Shanghai, Shen Jian (申剑), arguebly China’s best BMX rider, was worried about his eligibility for the Games.

Born in 1988 along the Yangtze River, Shen grew his interest in bicycles since middle school and began practicing BMX when he was 16. With hard training and perseverance, it only took him less than a year to get the Street BMX Champion in Huzhou, Zhejiang, one of the top trophies in BMX in the country. Shen then flourished in competitions in the coming years and, in 2008, Nike came to him to sponsor gears and outfits.

That year, Shen was dominant in street BMX competitions and won nearly all major domestic prizes. In 2010, the handsome young man signed with Vans to become the company’s first and only sponsored BMX athlete in China to date. 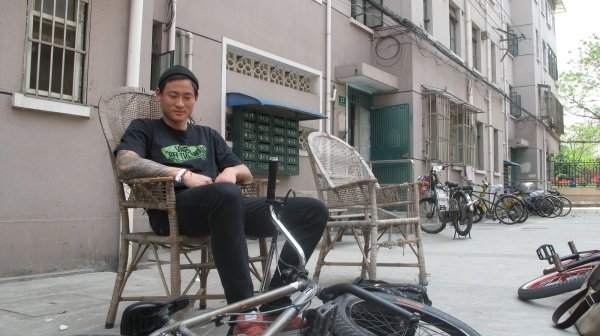 “The prize money in our country’s very limited, though you have several good sponsors here. The big money goes to the Chinese Extreme Sports Association (CESA,中国极限运动协会),” Shen complained.

“Sportswear maker X-Step pours 7 mln yuan into the China X Games competition (全国极限精英赛) every year. ” said an informant asked to remain anonymous. “But an athlete can get only about 15,000 RMB of prize money at most if he wins all the champions from its 10 races, a sum one can barely compensate his travel expenses.”

Founded in 2005, the Chinese Extreme Sports Association now manages competitions and events around the country in inline-skating, skateboarding, BMX, bike trailing and parkour.

“They established a BMX national team, and asked us to wear their sponsor’s jersy,” said Shen. “If you’re not a national team member, you’re out of the X Games.”

“A national team athlete gets very little from the association’s sponsorship,” said Wen Qiang (温强), a Nike sponsored BMX athlete. “The CESA has done nothing for us and their sole aim all these years has been making money by using these players.”

Unlike other tax-payer funded national teams, CESA teams provide no stipend, zero training or overseas competition opportunity for its members. But these are not Shen’s top concern at the moment. As his sponsorship deal with Vans forbids his profile linked with other sponsors, Shen’s worrying about whether he can actually compete in the X Games Asia.

“The X Games Asia is valued the most in all the competitions to us riders,” said Shen. “The sport really took off since they (X Games) came here in 2007, but there’s no way you can compete in the Games as a non-national team member now.”

Shen’s friends at ESPN wanted him and his friends in too. It’d be such a shame if the country hosts the event without some proper home-grown athletes participating.

In the afternoon of April 28, I met Shen in Jiangwan Sports Center, where the Games would be held. The 23-year-old was overjoyed to tell me that he can finally participate, as ESPN granted him a ‘wild card’ by which he’ll be able to compete in the Games for Shanghai. Li Haoran (李浩然) and Wen Qiang, two Nike sponsored athletes, were also granted the opportunity. 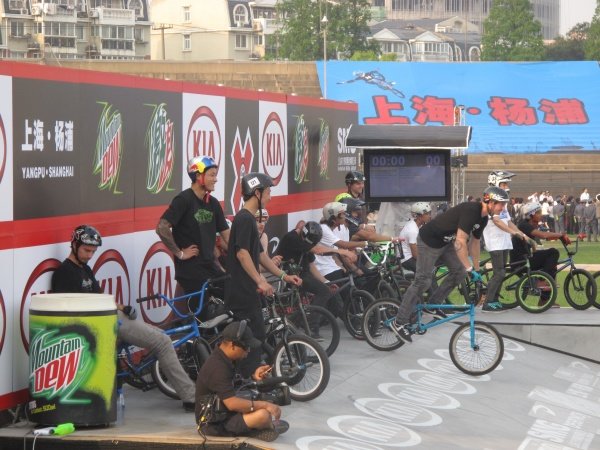 Gearing up for match play

“Maybe the association didn’t do this out of malice. It’s good to play for Shanghai anyway, as I was born and raised here.” Shen Jian’s optimistic about tomorrow’s elimination match.

The next day, I accompanied him to Jiangwan Sports Center. The match would start at five and we’re an hour early. Shen began practicing in street park with his buddy Li Haoran as I made my way to the stands.

By 16:45, Shen shouted to me from the park, “they cancelled me again!” The stadium was so noisy that I wasn’t able to make sure of his words. And I waved to ask him to step outside the park for talk.

“They say I can’t compete in the Games anymore. There’s nothing I can do now. Mei banfa.”

“What reasons did they give you?”

“But your name’s on the list, I saw it on the screen already. Didn’t you talk to people at ESPN?”

“I told them. They said there’s nothing they can do now and had to cancel us.”

“What about Li Haoran?” I asked about the Nike-sponsored athlete.

“He got cancelled too, both Wen Qiang and him. Only Zhang Zhiyong (张智勇) can play, as he’s wearing the national team jersey.”