“It is what it is. I’m going back to play for a while, just to take it in.” Shen Jian squeezed a smile at me and then walked back onto the stage. Only less than 10 minutes left for him to “play.”

Minutes later, Shen stepped down from the stage with Li Haoran and watched the elimination match with his team in athletes’ area. Behind him, there were a few DJs, organizers and media people scattered on the stand. Looking from afar, a middle-aged man stood out from the others. He wore a blue shirt and khaki pants. The pants seemed a bit short that you could see his legs. The man, as I later found out, is Wei Xing (魏星), general secretary at the CESA. 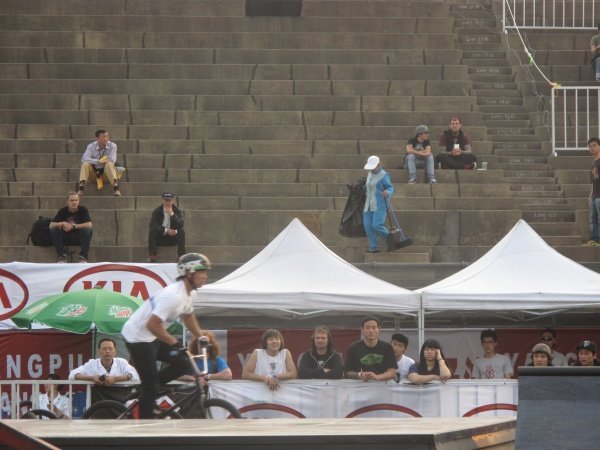 “It’s not the association doesn’t want him to compete. We have a set of rules that the athletes need to follow.” Wei told me when I asked him about Shen Jian’s last-minute pullout, and said Shen was out for “a multitude of reasons” that he ” has no time to go into details.”

The details about the incident, as I later heard from a friend close to an ESPN staffer, was that people from the association asked this ESPN guy right before the match to remove all Chinese athletes who’s not from the national teams from the list. If failed to cooperate, the CESA would not give them the permit to host the X Games Asia in China next year.

“The X Games has always been an open playing field and the qualifications is done on ranking systems,” said Harvey Davis, vice president at ESPN’s Events Management Group. “We work with government agency, the Chinese Extreme Sports Association, to make sure we have the best local athletes compete. So if that’s the case (Shen and other cn athletes barred from participating) that’s something we need to look into, but it’s not something that we’re aware about.”

A feature story on Shen Jian’s pullout is published on the May 13 issue of Sports Illustrated China.