Following China’s Defeat to Oman, Top Priorities for the CFA 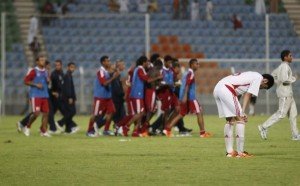 Chinese football hit a new low on June 23 as the national U-23 squad were beaten 1-3 in Muscat by their Omanian peers and lost 1-4 on aggregate in 2012 London Olympic Games qualifiers. The defeat marks not only the most short-lived U-23 team in the history of Chinese football, but also could make Miroslav Blažević, the acclaimed Croat coach, the most short-serving national team manager since the Communist Revolution after only two competitive matches of coaching.

Commentators, pundits and fans voiced their upset and anger on Chinese micro-blogging sites towards the Iranian Mohsen Torky and his linesmen, whose refereeing could be called into question on several occasions, most notably China’s goal called offside in the 93-minute. Miroslav Blažević reportedly called the referee a pickpocket when the team arrived back to their hotel. And almost as always, following Chinese teams’ defeats, the Chinese FA (CFA) was immediately criticized as corrupt and defunct.

With the likes of Nan Yong and Yang Yimin toppled in last year’s crackdown, the CFA formed its new leadership headed by Wei Di, former boss of China’s aquatic sports. Wei and his colleagues, as our ultimate Guo’an supporter B.Cheng noted in a post earlier, made a couple dubious calls leading up to U-23′s failure. But in the 18 months since Wei stepped in, he and his colleagues actually accomplished several things that should be given credit to.

None of these works can offer short-term return to Chinese football, but all are positive for the development of the sport in the long run.  I’m especially amazed by the Test Cities project but if you really think about it, those kids in over 2,700 schools, an enormous players base, a new question emerged – how are you going to engage these boys 10 years from now?

The top priority on the FA’s agenda should be shedding their image as a bunch of officials who sit in their offices all day doing nothing but taking bribes and rigging matches. And if you have this image ingrained in people’s minds, I really don’t see many parents would consider football as a decent option for their kids. In fact, due to the former transfer policy and a lack of an independent players association, the welfare of Chinese footballers have been sandwiched by the FA and their employers all these years.

Take, for example, two Guangzhou Evergrande (广州恒大) players in the reverse team. The two blasted out their discontent about salaries on a micro-blogging site this May, and were fired the day after doing that. This, if put in perspective, is a dictating and irresponsible act from one of the weathest and most influential clubs in Chinese Super League. I wonder where could the two kids go and what other clubs might think after the incident. The FA offered no help to the two boys and didn’t say anything about the case. What they should do is let the players in the leagues feel they are valued and got their back given there is no players union.

The football population has been decreasing sharply all around China in the past decade. According to Shenzhen Evening News, there were 21 privately-run football academies that had 1,290 kids studying and over 70 football clubs with over 5,000 kids back in 2002 in Liaoning Province. The number of registered football academies this year is down to zero.

The hopes remains only if the FA conjures up a way of selecting the best talents from around the country. To achieve that, they need to a) establish a mechanism that can transfer new blood up through the ranks all the way from schools to pro clubs and b) let potential pro players feel that they have a future in this profession. Otherwise, we can expect Chinese football to tumble further.