An edited version of this article is published in the Global Times.

When the lanky Shanghainese first landed in Houston in 2002, few expected him to achieve what he now stands for. In his nine seasons of playing in the NBA, Yao Ming averaged 19 points, 9.2 rebounds per game. Yet his contribution to basketball and the NBA cannot be told by these stats, as Yao basically globalized the sport more than anyone in history.

The news came out yesterday from Yahoo Sports that the 7-foot-6 player is to retire soon due to left foot and ankle injury, which already cost him the past two seasons. Yao’s injury was a typical result of over-playing. Since the 2004 Athens Games, the “Moving-Great Wall” constantly found himself moving over the Pacific Ocean to reunite with his Chinese teammates for glories in the Asian Champs, the Olympics after at least four surgeries. 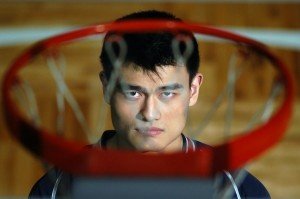 There’re claims from both sides, the Rockets and the Chinese sports bureau, about the other’s irresponsible role in playing Yao too much to a degree that even the Shanghai native himself tried to downplay the spat a number of times. At the age of 30, Yao can probably still play a reduced role in the NBA, but decides retirement as his best option for future career development. And what he left after the retirement are a multiple layers of assets that cannot be easily measured.

Yao Ming’s humble image and witful, humourous talk not only made his countrymen proud, but also made Chinese kids glue to the game. For sport in China, the most valueble legacy after he leaves should be those boys playing hoops around the country. There’re, according to the NBA’s estimation, 300 millions of Chinese playing basketball. And most of these 300 million grew up watching Yao Ming play in Shanghai and then Houston and drew inspiration from him. The game would not only make the next generation of Chinese more athletic and healthy, but more team-work oriented through competitions on the court.

But for the moment, this vast player base doesn’t equal the height of Chinese basketball, as there’s a great divide between grassroots and pro players. The CBA, the country’s basketball association, doesn’t really interested in organizing non-professional league in schools. In recent years, sports brands assumed CBA’s role in doing that, because for them, schools are excellent opportunities to market their brands and products. Chinese basketball could further unleash its potential given proper restructure work of league-building.

The professional league, the CBA, has its own faults too. After 17 years of operation since its establishment in 1995, the basketball players in the country still cannot be traded. This correlates with China decades-old sports school system, in which a player, like Yao Ming, is found, trained and developed in a local sports school and then supplied to a local club. Of course no Chinese club wants to lose a player in Yao’s stature, but an average bench player would also find it very hard to move due to a lack of regulation on players’ trading. The move-around of players every season is mainly done behind the closed doors between local sports bureaus and clubs, with so much guanxi involved. The result? You get only three champion teams in the past 16 seasons and familiar faces every year in the CBA All-Star Game. 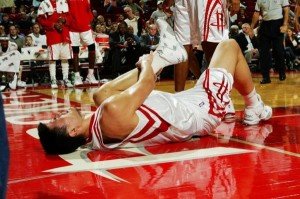 Yao may not be as fortunate as Mengke Bateer and Sun Yue, who received their NBA champ rings respectively with the Spurs and Lakers and, more important, both are still playing. Yet his fortune allowed him to do something his national teammates have never dreamed of. In 2009, Yao purchased Shanghai Sharks, his former team before joining the Houston Rockets in the Chinese top league. The team is reportedly costing Yao RMB 20 mln a season, but the new management he brought to the Sharks is strikingly positive and could herald change in the CBA if more investors come in.

On 20th this month, Yao will get back to his hometown to announce his future plans. His decision of retirement will become yet another lesson to many Chinese kids looking up to him but few had a chance experiencing themselves: When things go wrong, we move on. Let it be said that Yao is the greatest player in the history of sport in China so far and, as his name ‘ming‘ suggests, Yao’s legacy will be carried on in the generations to come.