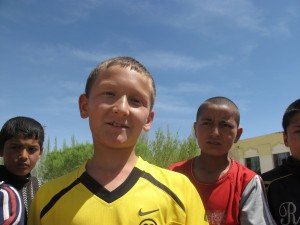 Uyghur soccer boys at an elementary school near Kashgar

The two tournaments, which are scheduled to take place in August and October in Urumqi and Artux, were called off by the local party committees due to security concerns.

The tournament in Urumqi invited teams from Kazakhstan,  Tajikistan, Kirghistan, Turkey and Russia to play against a local team and the organizers told us they may have to wait another year for these matches.

Maintaining stability has always been a top priority on the local authorities’ agenda  in Xinjiang, and this is certainly not the first time football matches are revoked there.

In his book The Uyghurs: Strangers in Their Own Land, Gardner Bovingdon, professor of Central Eurasian Studies at Indiana University, noted what maybe the earliest football ban in Xinjiang since the Communist Revolution:

In 1994 a number of Uyghurs in Ghulja decided to revive a traditional social organization, the masrap, in order to combat endemic alcoholism and drug abuse in the region. The masrap met regularly, with memberships of several dozen, to share music and dance, learn more about Islam, and hold one another to account for their public behaviors. Leaders of the gatherings had both ritual and religious authority to punish participants in front of their peers for violating the group code. The groups were quite successful at reducing alcohol and drug use and also at giving Uyghurs a sense of collective capacity to help themselves. They multiplied quickly.” In spring of 1995 the heads of all the masrap in Ili gathered and elected as the leader of all the groups one of the founders of the movement, Abdulhelil. He was detained for questioning soon after, and following this the government banned masrap, although the organizations continued to operate underground. An anthropologist living in Ghulja during spring 1995 concluded that what the party most feared about the groups was that they were organizations that “it did not initiate, supervise, [or] control” (Dautcher 1999:326).42.

In July and August, Abdulhelil and other leaders organized a youth soccer league in Ghulja, and many youngsters joined. On August 12, several days before the tournament was to begin, military officials occupied the playing field, parked several tanks there, and announced that it would henceforth be needed for military exercises. Officials also reportedly removed the goalposts from the fields at all schools in the area to ensure that the tournament could not take place. On August 13 Abdulhelil was again taken in for questioning. The following day, hundreds of men marched peacefully through the streets and then dispersed, an event that officials later referred to as the “August 14 illegal march.” Remarkably, though there was no hint of violent intent in the march, by noon that day snipers stood conspicuously on the roofs of buildings in the center of town, and the People’s Armed Police (PAP) controlled the main intersections with barbed-wire barriers (Amnesty International 1999; Dautcher 1999:325-27; 2004:285-87; Roberts 1998a::686). Abdulhelil and others, angry at the government’s heavy-handed action to squelch a very successful social organization, went on to plan and lead the protest in 1997…

While traveling in Xinjiang this spring, we discovered oftentimes “security” has been cited by the local authorities as a reason not to host any kind of sports events, even when the situation is not tense. In fact, a local source told us this has been the hardest part of hosting any sports event there. They do have the fans, fund and stadiums, but all is not enough without a go-ahead from the local government.

This is cross-posted on Wild East Football.