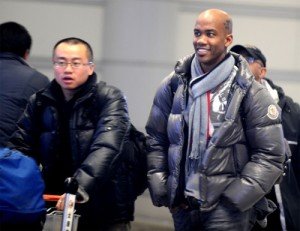 Aside from the Euroleague, the only other basketball anyone will possibly be watching this year is from the China Basketball Association as players and owners work feverishly to hammer out a deal to save the NBA season. With the start of the 2011-2012 season approaching there is a lot of anticipation an excitement.

Defending champions, the Guangdong Southern Tigers, will try to match the Bayi Rockets record for the most overall CBA titles, which stands at eight. They stand a good chance of accomplishing it with the temporary return of forward Yi Jianlian. Meanwhile, last season’s finalists, the Xinjiang Guanghui Flying Tigers, will try to overcome their defeats in the past three CBA Finals by winning their first ever championships with recent additions including national team coach Bob Donewald. Attention will be focused on some of the free agents signings from the NBA, especially former Denver Nuggets stars J.R. Smith, Kenyon Martin and Wilson Chandler. Lastly, Beijing basketball fans will be paying close attention to new signing Stephon Marbury, as he tries to erase their memories of Steve Francis once and for all (He’s probably already scored major points with fans in the capital for taking the subway to and from practice).

The season looks promising for the CBA

This could possibly be one of the most exciting seasons ever since the league started in 1995. However, there is still much work that needs to be done to make the CBA the top league in all of Asia and the latest incident does not help their cause.

Despite the fights and questionable officiating, the CBA still has a chance of improving its reputation and this seven-point plan could be used as a platform to steer them in the right direction:

One problem that the league needs to address is its coverage on television. Watching the games of the week on television shows that even the media lacks any motivation to promote the league to its domestic base. This has got to change if the CBA is to be successful.

One of things that can be done is for league officials to follow in the steps of the NBA and start its own channel (CBA TV). Provide year-round programming on its own channel that gets basketball fans more insight on the players, teams and games. This has worked for the NBA and it can work in China.

Another move that could work is for national and provincial channels to show more commitment to the league. Instead of having play-by-play commentators and analysts in a studio covering the game, get a team out to the arenas to cover the game. Hire sideline reporters to interview coaches and players prior to the game, at halftime and after the game.

If there is so much effort put into showcasing the NBA during its season, the same can be done for the domestic league.

It’s not the easiest job in the game, but CBA referees are the most scrutinized, by the fans and media at least. Missed calls or phantom calls during important games have made referees the target of ridicule and objects thrown from the stands. Last season could be used as a great case study for what is wrong with officiating in the league.

So what is reason behind some poor decision-making by the referees? Many reasons could be thrown out, but the real question is how to alleviate the problem? CBA officials made the right move to bring in foreign referees during the latter stages of the playoffs and finals, but that can only be done for so long.

The CBA must put more investment into training their own referees. Development is key to the improvement of referees and one of the best steps that can be done to improve the quality of the officiating is by conducting annual training sessions before the start of the season. Bring in experienced referees from abroad and have them sit down with local referees to examine game film and show them how they can improve their performance on the court. Put the referees in practice games where officials can evaluate their performance and point out their mistakes before they go into actual games in the season. 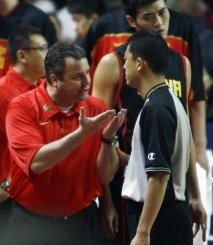 If it were up to Coach Donewald, this referee would be getting further training.

The CBA should also develop an evaluation system for referees. Monitor their progress during the regular season and choose the top referees to officiate playoff games. If a referee makes careless mistakes that affect the outcome of a game, then punish him like other leagues do. By doing nothing, referees do not learn from their mistakes.

If the league can punish players for infractions, then referees should be given equal treatment.

The basketball version of the UEFA Champions League has proven popular in Europe as some of the top teams ranging from Barcelona to CSKA Moscow compete in the league annually. It provides some of Europe’s top players, as well as foreign imports, quality competition that they may not always get from teams in their domestic leagues.

Currently, FIBA Asia organizes a Champions Cup tournament that invites some of the top teams on the continent. While it is a rather commendable effort on the part of the officials, the tournament can be improved by inviting the top club teams from China, South Korea, Japan and other Asian nations. Add in clubs from Australia and New Zealand (FIBA Oceania representatives) and an expanded format of the club competition can be very strong.

This can only help Chinese basketball players as they will get a chance to challenge themselves and enhance their skills against competition outside of their own domestic league. In addition, an expanded FIBA Asia club competition is going to attract fans as they will be attracted by visiting teams they don’t normally see.

An Asian Champions League for basketball can work in this region, but it will take basketball officials in China and other nations to get it up and running.

(Part 2 to be posted next week)