Fourteen Years And Counting; The Legacy Of Liu Wei In Shanghai 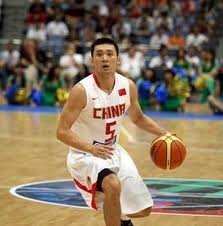 When you walk around the Yuanshen, you quickly realize that this is Yao Ming’s house. His image adorns the walls, the banners and the advertisements, whilst his retired jersey hangs from the rafters. During home games, Yao watches from his private box up high in the arena, looking down on players and fans alike like an emperor.

Yet if Yao is the liege of Shanghainese basketball, then Liu Wei is very much the heir-aparant. The two man are childhood friends, playing in same youth team together before both found themselves called up to the Sharks at the age of seventeen in 1997. There, under the tutaledge of coach Li Qiuping, they won a CBA title together, beating the then mighty Bayi Rockets in 2002, having lost to the military side in the two previous finals.

Lifting the trophy would be Yao’s last act for the Sharks before the NBA beckoned and the giant centre would not return to the team in an official capacity until 2009 when he bought the ailing basketball club. Yao and Liu were re-united in Shanghai but with an odd twist; one man was now technically the boss of his close friend.

Though Liu also made it to America, it never worked out like it did for Yao. On trial with the Sacrimento Kings in 2004, Liu played against his old team mate in the ‘China Games’, two preseason matches between the Kings and the Houston Rockets that  got obviously high viewing figures in Asia. This was as close as the guard came to making the NBA; Liu played thirty-four minutes over three games, scoring two points and getting four rebounds. Sacrimento didn’t pick up the option and the point guard returned to carry on playing for the Sharks.

Yet inspite of not being able to make it to the NBA, Liu Wei remains a popular, well-respected figure in Chinese basketball. As well as captaining his country, he has won one gold medal with China at the FIBA championships and two at the Asian Games. Last year, he became the first player in the CBA’s history to score 6000 points, 1600 steals and 700 assists. Within China’s social media sites, he is one of its most ‘liked’ figures, and fans at the Yuanshen will still gather by the players’ tunnel before and after games to reach down to Liu for a high five or an autograph.

There have of course been controversies, most notably in 2008, when along with three other team mates, he got involved in a post game confrontation with Gabe Muoneke, then playing for the now defunct Yunnan Bulls. The American was chased and cornered by the players in front of Muoneke’s family in what the CBA referred to as ‘[an] incident [that] was abominable and serious in nature, casting a terrible influence over society and seriously harming the CBA’s brand and reputation”. The point guard had the book thrown at him, and was fined heavily and suspended for ten games.

Its testament to his popularity however, that despite the Muoneke incident and the Sharks record in recent years (they have only had two winning seasons since 2002), Liu is still an important figure to the Shanghai supporters, who fete him with the same adoration as other fanbases in other sports might regard Derek Jeter, Paolo Maldini or Mario Lemieux; one-club players who have stayed with their team through thick and thin. Their mistakes on and off the court are excused by the supporters because these players have become fused to the very identity of the club. By staying around for so long, they have shown the same passion and commitment to the team as the supporters do.

Liu’s willingness to give his all for the Sharks has been well documented, although as he gets older, it will need to be stored and used carefully. In a recent CBA game against Lioaning, with Shanghai falling behind to a high scoring offense,  Liu, who had previously hobbled off due to knee pain, dragged himself back onto the court to help with the chase. It was ultimately fruitless as Shanghai were beaten decisively and Liu may well have made the injury worse (he would leave the subsequent game against Guangdong Tigers in the first quarter and has missed every Sharks game since then) but it underlined his desire to help his team win.

Liu will be thirty-two by the end of this CBA season and depending on the state of his body, he could play for a few more years to come. In a young team with masses of raw potential, the guard might be tempted to keep on playing into his thirties as his team mates mature, although he has also suggusted an interest in coaching.

When he does call it a day, Liu’s number will almost certainly be retired and raised to the rafters along with Yao’s. The two friends then will probably end up sitting together in the owner’s box, watching the team they led to a title almost a decade ago move onto its next chapter. Yao has already secured his legacy and in what time he has left, Liu will be seeking to make his already lengthy list of achievements that little bit longer.