In the Dark with Happenings at Guangzhou Evergrande

The football club that every follower of the Chinese Super League loves to hate (at least outside of Guangzhou), Guangzhou Evergrande, has been making the rounds in the media over the past month with rumors of signings and especially the supposed hiring of a new manager to replace their current one. However, there has been no confirmation nor denial on any of the moves that have been reported on various sites.

With the defending league champions suffering an early run of indifferent form (a shock 2-0 defeat to new crosstown rivals Guangzhou R&F followed by an even more shocking 2-1 defeat to Thailand’s Buriram United in the Asian Champions League), the first rumors of a coaching change hit the internet when it was reported that former England manager and purported ladies man Sven-Göran Eriksson, who was in attendance during Evergrande’s 3-0 win over Henan Construction, was in town to possibly take over the coaching reigns. However, the club’s current coach, Lee Ja-Soo, was quick to come out to the media with a denial over a coaching change, saying that Eriksson was merely there to watch the match.

Eriksson is in need of a job, but is he on Evergrande’s radar

A report from Wild East Football proves to be more credible into Eriksson’s true intentions in China as more cities throughout the country are looking to have a top flight football club.

However, it has not stopped the rumor mill from swirling as in recent days Goal.com reported that former Juventus and Italy coach Marcello Lippi came to terms with the southerners to become their new coach. The report has been shot down by both the club and Lippi, but it is still uncertain as to whether this story will die down. 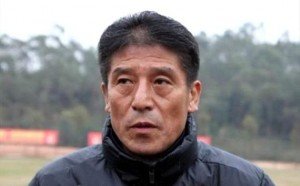 Is Lee Jang-Soo about to receive his marching orders from Evergrande?

Add in the reports of certain players being linked to the club, including the signing of Borussia Dortmund’s Paraguayan international Lucas Barrios, and one is still left in the dark as to what is going on with the club.

Since the team was acquired by the Evergrande Real Estate Group in February last year, there has not been one dull moment at the Tianhe Stadium as the club has displayed it dominance on the field, while off the field they are often in the sports pages whenever there is talk of transfer targets or fining players . The club has set out an ambitious plan to become a force in club football around the world and its owner, Xu Jiayin, has layed out the cash to make this plan become a reality.

“We will be at the top of Asia in five years.” Famous words from Evergrande’s owner Xu Jiayin

However, with the team not topping the table at the moment and still not showing any glimpses of its dominant performances from last season, there has got to be much talk as to what management will do in the coming months to rectify this problem. If Lee does get the sack, will Evergrande follow in the steps of Chelsea FC, Paris Saint-Germain or Real Madrid in signing a big name coach? How can they reinforce the squad when they are not allowed to surpass the number of foreign players set by the CFA?

Whatever Evergrande’s plans are, they had better solve them as quickly as possible or else they will find themselves falling further behind the competition in the league and dumped out of the ACL.