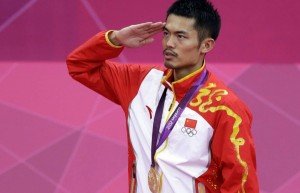 Lin Dan remains king of the mountain in London

At the 2008 Beijing Olympic Games, China’s top badminton player, Lin Dan accomplished what many had expected him to do years before when he stood atop the podium to collect the men’s singles gold medal over his rival, Malaysia’s Lee Chong Wei.

Four years later in London the man known as “Super Dan” found himself in the men’s final again going up against the same opponent and once again the result was the same as the defending Olympic champion knocked off Lee in a thrilling final that should have at least made up for the debacle that happened in the women’s doubles competition.

While most in the sporting world have had their eyes on US swimmer Michael Phelps’ pursuit of becoming the most decorated Olympian in history and Jamaican sprinter Usain Bolt’s attempt at repeating his success on the track, the four-time world champion was looking to become the first men’s singles player to repeat as champion since the sport was granted Olympic status back in 1992.

Consider it mission accomplished for the man from Fujian Province as he flew around Wembley Arena in joy. Who can blame Lin for his reaction? In what could possibly be his final Olympic Games appearance, he deserved to bask in the glory.

While the 28-year old has won many honors in his long career and is well known throughout Asia, his victory and legacy could possibly help the sport grow into other parts of the world.

Since the 2008 Beijing Olympic Games, there has been much discussion about how China uses sport to promote its soft power. In a day and age where most of the world knows about Kobe Bryant, Lebron James, Lionel Messi and a host of other sports stars, China has pushed athletes such as Yao Ming, Li Na and Liu Xiang into the international spotlight.

However, while they all are in sports that are heavily followed by sports fans around the world, badminton is the one sport that could use a lift in other parts of the world where it is just a mere recreational activity. While the Badminton World Federation (BWF) can do better in promoting the sport by getting the top players to play exhibition matches and conduct clinics, it could also benefit China if they started their own sprots diplomacy program where they send some their top athletes from sports such as badminton and ping pong to inspire greater interest.

China’s domination of the two sports has been a cause of concern for both the BWF and the International Table Tennis Federation, but it is an issue tha the country cannot be blamed for as it produces some of the best players in the world. In fact, the core problem could be the promotion of the respective sports.

By having Lin and other Chinese athletes pay visits to areas where their sports are not followed much, it could be a win-win situation for China. One, it increases the profile of the sports and it could show younger athletes that there are many alternatives should their path in other sports not pan out the way they want. Two, it helps with China’s image abroad. While the world is quite aware of the country’s great progress and emergence as an influential global power, it would be a great idea if their athletes could be introduced to a wider audience, especially youngsters who are just starting to be exposed to different sports.

Through their appearances to the public, it can further eliminate the skepticism that some people may have and increase their knowledge on a country that is going to be a major player in the world for years to come.

China has already established various sports exchanges with countries around the world, but by establishing their own sports diplomacy program like the United States or what the National Basketball Association (NBA) does through its Basketball Without Borders program, they could possibly help with the increase in participation of the sports. Thus, it could lead to greater competition should young people take the sports seriously in the future.

It is unknown as to what is in store for Lin Dan’s future. However, it goes without question that the reigning Olympic champion will forever be an ambassador for the sport of badminton and one that can help transcend it from just being a regional sport into a more global one.