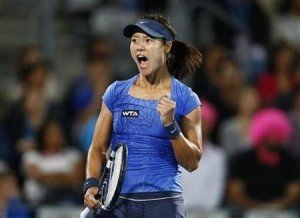 What does the 2013 WTA Tour have in store for China’s top tennis player?

With the new year in its infancy comes another season of action on the world’s tennis courts, and this year it seems there will be an exciting one ahead for fans of the sport.

The 2013 Women’s Tennis Association Tour (WTA) could be a wide open competition this year as there does not seem to be one player who will be dominant in the field. Of course the usual suspects such as Serena Williams, Maria Sharapova, Victoria Azarenka, Petra Kvitova and Agnieszka Radwanska will most certainly be attempting to claim as many of the majors as well as finish atop of the rankings by the end of the season.

Another of those contenders is none other than China’s number one player Li Na.

Since claiming the 2011 French Open women’s singles title, her rise in the tennis world has been nothing short of meteoric. With winning her first major, there has been added pressure from fans and much more scrutiny from the media about her performances.

However, the following tour season was not too kind to the 30-year-old as Li came up short on several occasions to add on to the number of career titles she has won and even crashed out of a few tournaments in the early rounds. All of this could have pointed towards a decline in her game and raised questions about when she planned on retiring.

With the hiring of coach Carlos Rodriguez, who worked with former tennis start Justine Henin, the world number six seemed to regain her form in the latter part of the season that saw her make the finals of the Rogers Cup in Montreal, win her only title at the Western and Southern Open in Cincinnati and qualify for the season-ending WTA Championships in Istanbul.

Off to a good start in 2013. Li Na claimed the inaugural Shenzhen Open title.

And the Wuhan native has carried this form into 2013 as she won the inaugural Shenzhen Open and followed that up with a semifinal run at the Apia International Sydney in Australia, losing to top seed Radwanska.

Li, without a doubt, has credited Rodriguez for helping her to refocus and bring her game back to level she knows she can play at.

After Carlos came to my team, the change was unbelievable. I was happy to have him because I think he is a positive person and gives a lot of positive things for all the team. He makes me train a little bit for strength in the mind, not only for tennis.

As the Australian Open starts up on January 14, Li will certainly be considered one of the favorites to lift the Daphne Akhurst Memorial Cup. She has had strong runs in previous editions of the tournament, where she reached the final in 2011, losing out to Belgian Kim Clijsters.

This season seems it will be a promising on for Li Na. She has always had a strong start at the beginning, but the big question will be whether she can maintain that form as the season progresses into the spring and summer months.

If she can do this, this could be one of the most successful in the illustrious career of China’s tennis legend.