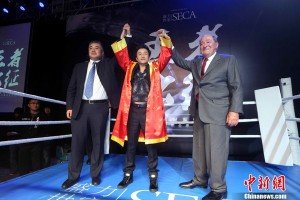 It’s been discussed for very long that whether Zou Shiming, China’s two time Olympics gold medalist, would pursue a career in professional boxing. The talks floated first after the Beijing Olympics and, again, after Mr.Zou successfully defended his gold medal in light flyweight last summer in London.

The news came out earlier this week that Zou is signed by Top Rank, a Las Vegas-based boxing promotion firm, and is preparing for his first pro fight this April in Macao.

In the Qilu Evening News, a Jian-based newspaper, Mr.Zou was then compared to Li Na, the first Chinese tennis player to win a Grand Slam in singles.

“The Chinese sports system may look old-fashioned, but should be given credit for treating [some] Olympic heroes,” the article commented, though some Chinese Olympians may disagree with this conclusion.

Tennis and boxing are tremendously different in popularity and media exposure in China. Thanks to the success of Li Na and a rise in consumption capacity of China’s emerging middle class, business of tennis clubs shot up quickly in recent years and is expected to continue so. But boxing is another story. Despite the accomplishments of Mr.Zou and his colleagues, it is still considered rough and brutal by most Chinese.

Last November, Xiong Chaozhong, a professional boxer from Yunnan and an ethnic Miao same as Zou Shiming, made history in becoming the first Chinese to win a world title. Liu Gang, the promoter of Xiong and owner of Zovi Boxing in Kunming, Yunnan Province, said it’s very hard for pro boxers to sustain themselves in China due mainly to a lack of competitions.

Born in 1972, Mr.Liu was among the first group of amateur boxers trained in the national team when the country re-embraced the sport in 1986, after nearly thirty years of ban because of the sport’s “bourgeois element” and, probably, two fatal incidents.

Liu’s career as an amateur boxer culminated when he won silver in the 1990 Beijing Asian Games. After the 1992 Summer Olympics in Barcelona, Liu emigrated to Australia to pursue his dreams in professional boxing. The new environment was tough, but the Sichuanese ate bitter and thrived. In 2003, Liu sold his house and returned to China to found Zovi, training boxers and organizing fights at the same time.

“But after so many years as a promoter and organizer, I still have no clue who should talk with to get an event sanctioned,” confessed Liu, who found the situation “very ironic.”

To get an approval for a match in China’s mainland, an organizer needs to register the event at a police bureau, as the Chinese government impose tight restrictions on freedom of assembly. But before that, he needs a permit from a sports bureau, which is where the difficulty lies.

The Boxing and Taekwondo Administrative Center (BTAC), top governing body of boxing in the country, is responsible solely for producing Olympic champions, not promoting pro boxing. They are not fans of pro boxing either. Last year, a WBO event in Tianjin was called off by the BTAC after over two years of running, making a stand of their determination not to favor any pro event.

The sports official feared that the event would make them look bad in front of International Boxing Association (AIBA), an organization governing the sport in the Olympics, and under which the BTAC manifested themselves as the “Chinese Boxing Federation.” The AIBA is set to host its own pro boxing matches this year, and the Chinese sports leaders are unsure about the idea to be implemented in China.

To make things work, organizers either get direct approval from a city government (like the WBO events propped by Zhang Gaoli, the former Tianjin Party boss), or pay a huge sum to local sports bureau only to get their project stamped, usually packaged as a quanji biaoyansai or “boxing performance show.”

“I think the resistance comes from the fact that our country hasn’t kicked off pro boxing officially,” said Zhang Tao, chairman of WBO China, who maintained that a better solution for organizers now is to work with local governments.”

“We too can train Olympic boxers to win glories for the country in the Olympics and we don’t spend a penny of tax payers’ money,” said Liu Gang. “I just hope they mean it when talking about ‘lifting the sports industry’ and make less trouble for us.”

Until now, it’s doubtful that Zou Shiming’s decision will help change the situation of pro boxing in China, but his presence will definitely make the game more popular.