The Ambassador and the Future of CN Football 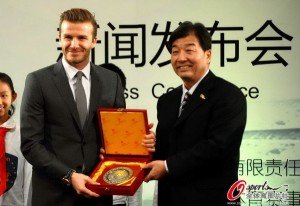 A busy week began for David Beckham, who was recently appointed as Chinese football’s first-ever ambassador, at an elementary school yesterday in Beijing. The former England captain received gifts from schoolgirls, learned to write his nickname in Chinese calligraphy, and talked to media at a press conference in the school auditorium that was aired live on CCTV, the national broadcaster.

When asked what he can do to help Chinese football, which has a long reputation for match-fixing and corruption, the ambassador confirmed that he is not a politician, and has nothing to do with anything gone in the past. “What is going on in the future will have something to do with me,” said Mr.Beckham.

Though unclear how, that something is about inspiring the grassroots to take interest in the sport in the coming three years in his contract and promote the Chinese Super League, a league that the ambassador has never set foot in or even watched.

The scandals in Chinese football not only led to officials and players being banned or jailed, but also made many fans lose faith in the sport. Compounded by China’s one child policy, parents no longer wanted their kids to play in football like in the 1990s, when being a pro football player suddenly became a chic profession, with good pay and media celebrity.

Earlier this week, my colleague told me about the time he spent with two retired football players recently, which said a lot about the way Chinese urbanites see the sport.

Born in the late 1970s, the first player was once a promising winger in the Chinese setup, spent a majority of his time at Beijing Guoan and retired very early at 29. He now commentates on Guoan games at the weekends. He and his wife has a kid, who’s interested football but was never allowed to play. My wife would never want our kid to play football, the player said, she thinks it’s mei chuxi, or “not promising”. Instead, the couple encouraged their child to play tennis, and by doing that, they built him a clay court, which you very rarely see in Beijing.

The second player is a few years older than the first. Spent time at two big clubs in the north and once a national team player, he now has successfully rebranded himself as a football commentator, musing on Chinese league and Spanish La Liga on match days. He, too, doesn’t want his son to play in the sport. My son runs faster than other kids and, with my guanxi, it’d be easy for him to train in any club in China, said the player. But together with his wife, they consider football a profession without a future.

I was taken aback by the way the two veterans looked at the sport they loved and played, even with the knowledge that Chinese football is problematic and can be ridiculous sometimes. The truth is, the past that Mr.Beckham is not involved actually shapes and speaks about the future. If the score of the past is not settled, who knows what will come next?

Last month, the CFA announced that twelve football clubs, including Tianjin, Jiangsu, Shandong, and Shanghai in the top flight, were found out to have fixed matches in the past. The punishment? Some clubs were fined from 500,000 to 1 million rmb and deducted 3-6 points this season for bribing football officials and referees. Others were mostly exonerated, because the clubs either no longer existed or were changed hands. Not a team was relegated and it’s unclear how many were arrested for their wrongdoings.

If the decision sent a message, it’s rather an unclear one to football practitioners in China, that the consequences of achieving results by bribery was unjust, but affordable. Besides the clubs, this message was also delivered to the future that the two veterans wanted their kids to avoid and Mr.Beckham is going to be a part of.