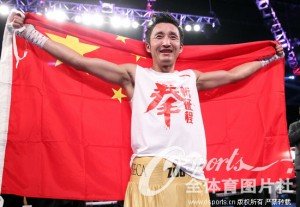 All of the hype for two-time Olympic gold medalist Zou Shiming’s professional debut was finally put out of the way on late night Saturday as the flyweight boxer recorded his first victory over Mexico’s Eleazar Valenzuela in a four-round match in the special administrative region of Macao.

The 31-year-old Zou, who is signed to Bob Arum’s Top Rank Boxing promotion, was the centerpiece on a night when his fight was broadcast on nearly every sports channel throughout China. Zou did not disappoint as he overwhelmed his opponent with a series of combinations and power punches as he looked to also score his first knockout.

Despite Zou’s failure in knocking out Valenzuela, he walked away with a comfortable unanimous decision to bring some joy to the spectators on hand.

While the much heralded former amateur champion showed a great display offensively, he has got to learn to protect himself as on a few occasions he would have his hands down, leaving himself open to take punishment from the valiant Valenzuela. Any potential opponents in the future will take notice of that and will certainly use it to their advantage.

However, it was a good debut for Zou who will be looking to improve on his performance in his upcoming bouts which will hopefully put him on track for a title shot.