Going Italian! Could Wang Jianlin Be Seeking a Stake in AS Roma? 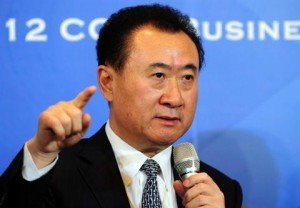 Dalian Wanda Group Chairman Wang Jianlin is no stranger to making the headlines in Chinese and foreign media circles, and this time it has been no different.

In September, China’s richest man announced the launch of the Qingdao Oriental Movie Metropolis complex in the eastern province of Shandong with a bevy of well-known Chinese and international film stars such Huang Xiaoming and Leonardo Di Caprio on hand.

He has also faced controversy as he was heavily criticized by Chinese netizens for his 28-million-U.S. dollar purchase of a painting by the late Spanish artist Pablo Picasso.

Like many of the world’s billionaires, Wang has tried to make inroads wherever his money and influence can make an impact and football is one place where the Wanda Group has been splashing the cash as of late. It was two years ago when Wang and the conglomerate made their return to Chinese football by announcing an agreement with the Chinese Football Association which included sponsorship in the Chinese Super League and a scheme which would take some of the country’s young football talents abroad to receive training in hopes of reversing China’s fortunes in international football.

China has only qualified for one World Cup, back in 2002, and has not had much of an impact in the AFC Asian Cup as of late, with their best showing coming in the finals against Japan back in 2004.

Now, according to reported rumors by various media, the former soldier is looking at taking up an ownership role in European club football as it has been reported that he is interested in purchasing a stake in Italian Serie A side AS Roma.

Not many details have been released about supposed talks between Wang and Italian global banking and financial services company UniCredit, which owns about 39 percent of this season’s league leaders, but club president James Pallotta posted a message on Roma’s official website denying there were talks between the two.

Talk of Chinese investors buying a stake in foreign teams is nothing new, but it is has been surprising that investors from the Middle Kingdom have not made any concrete moves to enter sports leagues overseas as the country continues to rise on the global economic stage.

A few years back a group of investors led by (Kenny) Huang Jianhua were looking at buy a 15-percent stake in the National Basketball Association’s Cleveland Cavaliers. However, the move never materialized and fizzled in the end.

Huang was also part of move to purchase English Premier League side Liverpool FC a few years back, but that also failed to gain any momentum.

Just last year it was reported that the China Railway Construction Corp was in talks with Inter Milan to construct a new stadium for the club, with Inter officials adding that the Chinese side would also purchase a 15-percent stake. However, the railway company refuted those claims and nothing has been mentioned since of any agreement between the two sides.

The only noteworthy purchase of a foreign club by a Chinese investor was back in 2009 when Hong Kong businessman Carson Yeung purchased English side Birmingham City FC. However, it has not been good news for the eccentric owner as he has been going through a money laundering trial back in the special administrative region, which could ultimately lead him to selling the club.

Ownership of foreign clubs has become something of a niche as it can shown by the number of owners in the English Premier League, and it looks like it may not cease in the long run. However, the question is when will the sports world start to see more purchase by China’s billionaires as some long-time owners seek to cash in on offers from individuals from emerging economies.

If Wang Jianlin’s rumored interest in purchasing a stake in Roma comes to fruition, this could possibly be the first in a myriad of news about more Chinese billionaires looking to put their money into foreign sports leagues.