RUFF Not Getting it Right, And Here’s How They Can Improve 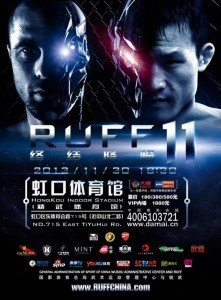 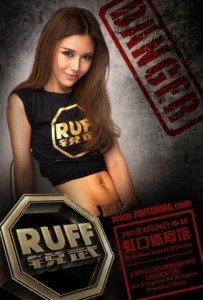 How Can RUFF Be Better Presented in China?

Your correspondent spent his last evening watching RUFF 11 and have some initial thoughts after the show. For those unfamiliar, Ranik Ultimate Fighting Federation (RUFF) is a Shanghai-based mix martial arts (MMA) organization founded in 2007. While RUFF prides itself on being the first MMA organization sanctioned by China’s national sports bureau, the show last night was far from convincing to be successful.

For broadcasting, RUFF 11 was not on TV, but was streamed online for free, which helped save cost and get them closer to a younger audience. The show was on sports sections of two major portals, Sina and Tencent, and also on video sites such as PPTV, LeTV, Youku and iQIYI.

Tickets sales not promising as usual. We’re not sure about the numbers on Damai, but RUFF’s store on Taobao sold only 33 tickets in total. Many seats were empty and, looking from the broadcasting angle, by the time the main event was staged, half of the audience in the front seats were gone, which sounded weird but understandable if you watched the show. And here’s how we think RUFF can improve:

a) Get a better announcer: It seemed the announcer last night had little idea of what he was doing other than shouting fighters’ names to the camara. He even admitted after a fight that he understood little of the sport and, for several times, tried to decode “thank you” for his audience without asking any questions to the athletes. There were guys around the fighters that could help translate but the announcer just ignored them throughout.

The Chinese fans are shy but presumably would want to get more than just a few good fights from the card. They would want to know more about the athletes on stage, things like how they approached the game, what’s their training like, where and how they could do better, etc. Unfortunately nothing like that were offered last night.

Asking questions are important because by speaking with the athletes, you’re not only providing those information to the audience, but also creating a connection between the athletes and the audience , which is paramount, considering it’s still the early days of MMA in China.

b) Introduce your fighters better: Without telling your audience athletes’ MMA record can only hurt your brand. Why it’s Bekbulat Magomedov, a “zero-RUFF record” athlete, as the announcer introduced, came on stage to fight the main event but not somebody else? Who is this guy and what he is capable of? It’s disappointing to hear the commentators also knew little of this Dagestanian.

It would definitely be helpful to have a momentum going before this fight and the rest. By introducing the fighters better, your audience can get an idea of what can be expected from the show and you also make the athletes feel they’re respected by the organization for what they’re doing.

c) Sign better fighters: While it’s true the level of Chinese fighters are not high enough, it’s still surprising to see most of them come on stage without really a fight plan. There were few high kicks and most of them can’t really take punches.

A majority of the athletes in RUFF 11 are in flyweight and bantamweight only, which makes the show less appealing. It’d be great to bring more competitors from outside of China for different weight class, but that would definitely not help building a local hero.

d) Belt or no belt: State-sanctioned is good, because without it there would be no fights allowed. And with it comes five belts that were awarded this February. But two of this five champions, Zhang Meixuan and Wang Guan, lost their fights in RUFF 11 and there’s no belts involved? So one might ask what’s the point of these belts anyway?

In all, we think RUFF is still getting better. The shows are better sponsored and better distributed than before. But the product needs to be better packaged and presented to the Chinese audience, which, with all due respect, obviously takes more than a Herb Dean. For the young organization, there’s still much to be done in the future to stay good in the business.

Joel Resnick, CEO and Co-Founder of RUFF China, spoke with us on the questions we raised and more here in this post. The complete streaming of RUFF 11 is now on Youku.