We Asked, They Answered: Joel Resnick on RUFF11 And More 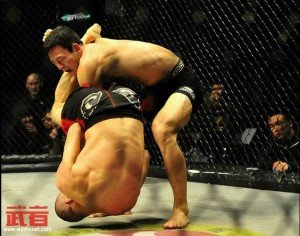 After watching RUFF11 last Saturday, we posed our doubts and concerns about the show. A week later, Joel Resnick, CEO and Co-Founder of RUFF China, spoke with us on the questions we raised and even more. We’re also very impressed to see that, in order to make the fights better, the RUFF China team has been working hard to solicit constructive criticisms on their social media platforms from the fans.

We published Joel’s answers below hoping that they’re not only here for the sake of clarification, but also help create a dialogue on the sport of mixed martial arts in China. We learned from and agreed with Joel on most topics except his comment on The Ultimate Fighter China, to which we’d like to give out our reasons in the next post. The answers from Joel are edited to fit the form of this site:

We don’t usually sell on Taobao. Everything goes through Damai and 247 Tickets, which is another tickets distributor in Shanghai. Total seating this time was over 2,000 people there and we’re pretty happy with it.

Nobody left. What you guys saw was people were standing up and start pooling in areas. They were there at some areas even near our table. People were just rushed to see the fight.

The reason we don’t do it live [on TV] in China is too much of a time constraint. It was a cost concern but also a time concern. We did in Chongqing and Inner Mongolia. The problem is we have to go by their time schedule and our viewer numbers actually dropped because a lot of times they wanted to run it in a Saturday afternoon. And at 6:30 pm when we’re starting they have their news running.

We’re working on a couple of deals now with two different satellite providers, where we’re going to be able to run in normal TV time slots. I don’t want the TV to control what time we have to have our fights. If you do it by TV or by satellite, it takes away from the people who really want to watch it. So we’d better just stream it and they can watch whenever they want it.

On The Ultimate Fighter China:

As far as I’m concerned, it’s an ultimate joke. Because the fighters that they have aren’t professional fighters. Most of the guys have one or two fights maximum. Honestly, it doesn’t really matter to me. Even the finale, it’s gonna be in Macao. I wish it would do better, because it would draw more attention to RUFF and the sport.

The interesting thing that I find is that, even in North America, nobody’s talking about The Ultimate Fighter China. When there’s TUF Brazil or they’re talking about it going into Russia, it’s big news all over. China, nobody even talks about it. Even Dana White doesn’t talk about it.

On whether to include belts in regular fights:

Because we’re sanctioned by China’s national sports bureau to give out China’s national championship belts. It’s a RUFF belt and it’s also a China national belt. We did the same in Bellator, it was done like a tournament style because it the first two years we didn’t have enough fighters to know that we’re gonna have title defenses.

Plus, the other thing is, in China, all these fighters think they can fight eight times a year. Normal fighters in China, when you speak with them, the biggest thing they want is to fight every month. And if you do fight once a month, the span of your career is gonna be drastically shortened. We want more fights. But they can’t. People are turning down fights.

He’s from one of the satellite TV we’re talking to. We tried him out and see if it would work. But he did not listen to one thing that we told him to do. He didn’t follow any of the instructions.

On the fight cards:

One thing that we do have and I think you’re wrong on this is everybody loves the fights. In the last two events, we don’t have any complaints about fight cards.

On why not introducing fighters’ MMA record outside of RUFF:

It’s because most of the records aren’t real and the only we can trust is their RUFF record. Go and check out Chinese fighters, 25 wins, no losses. This is why we go and tell our thing, that these are their RUFF records.

Believe it or not, they have real fight plans. You see, we have to give them the chance. We have to let them get out and see. And that’s the other thing. One of the guys, the American from Taiwan [Tom Woodfin], his coach was screaming at him. He didn’t follow the game plan. Because they’re not experienced enough to really understand.

Every one of these guys have game plans and they’ve been watching videos of the other fighters. They have the plans there, whether they are advanced enough to use it yet, that’s part of building the sport and athletes. It’s getting there.

We bring Herb Dear here or Jerin Valel here, we spent a lot of money. And that’s not a promotional stunt. It has nothing to do with being promotional. It is for one thing and one thing only, the safety of the fighter. We bring him here, especially for this fight, because the level of the fighters are getting much better. And I need to know there’s somebody in that cage is really gonna take care of the fighters and know what the hell he’s doing.