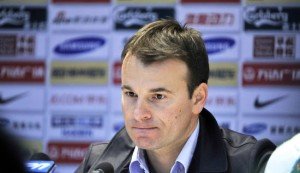 The news broke yesterday that Beijing Guoan, the capital side in Chinese Super League, have been brewing to sack manager Aleksandar Stanojević.  It came as a shocking decision because the club just extended the Serbian trainer’s contract by another two years on September 18, exactly three months ago.

Speaking with The Beijing News,  Stanojević confirmed that he received the message from the club but had little clue about the decision. Meanwhile Luo Ning, honorary president at Guoan, expressed today to Soccer News that the club will speak with any new manager to come about the choosing of new imported players for the new season. So far, the club hasn’t released an official statement yet. But, sadly, according to a reporter at BTV, the delay in responding is more about having an upper hand in contract talks with their potential candidates.

Whatever excuses the club may have, the dismissal, if it were to come, would be a self-contradictory decision that explains the nature of Beijing Guoan as a football club. The fact that the Beijing side is owned by CITIC Group, a state-owned conglomerate under direct control of China’s cabinet, means that the club management is never independent in their decision-making. Thus, their actions can never be justified purely by the logic in sports business.

The sacking, on a business level, is beyond stupidity. Yes, it may not cost as much as the CFA’s parting ways with José Camacho as the national team coach, but it would definitely cost a fortune. In a poll conducted by Sina, a major Chinese portal site, nearly 90 percent of the fans do not understand why Stanojević needs to be fired, with over 11,000 Internet users (and counting) among the respondents. Does the question of how many fans the club may lose ever crossed their minds? The decision was a total disregard of the feelings of their supporters, again.

On a football level, the decision also makes little sense, as Stanojević did everything Guoan asked of him on paper. Under his coaching, Beijing qualified from the group stage in the Asian Champions League, finished the 3rd in the Super League, which are the main goals the club set for him. Off the pitch, the young coach is the first and only in Chinese top league that communicates with fans via social media. Jiangsu Sainty’s Gao Hongbo also has a Weibo account but never updates.

Critics may argue that Guoan lost a key duel in the semifinal of Chinese FA Cup by 3-7 on aggregate to Guangzhou Evergrande. But let’s not forget we are talking about two clubs with a huge difference in budget and commitment by looking at their track records. Add to that it’s still the first season we saw Guoan under Stanojević’s coaching.

Before joining Beijing, Stanojević first came to China in 2012 to manage Dalian Aerbin in mid-season and helped the newly-promoted club reach 5th on the table of Chinese Super League. His greatest achievements as manager are with FK Partizan. Under his coaching, the Belgrade side won three titles in two seasons and qualified for the 2010-11 UEFA Champions League.

It’s very clear Beijing Guoan would like to continue working with Stanojević back in September, but whatever happened in the last few days made them decide to breach the contract and retract their words, we can only guess. It’s possible as rumors suggested that the decision to keep Stanojević was overruled by someone higher in the political ladder.

This is just another example of one of the things that separates me away from Beijing Guoan’s loyal supporters, for whom I only have my utmost respect. I often find it hard to call myself a Guoan fan because I could never come to terms with certain decisions the club made about or attitudes towards the players, coaches and, more important, their supporters.

Stay informed about China sports news by following us on Twitter