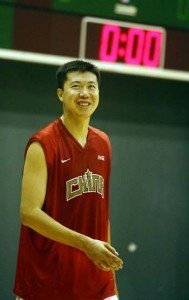 The 1999 NBA Draft is one that did not exactly produce any spectacular players, but it will be remembered for several moments that occurred on that night in Washington, D.C.

The top moment was without a doubt Steve Francis sulking over being picked second by the Vancouver (now Memphis) Grizzlies. The look on his face that night seemed like he had just gotten word that his car got repossessed.

That draft class also introduced NBA fans to players that would leave a lasting impression – namely Ron “Metta World Peace” Artest (the Palace Brawl), Russia’s Andrei Kirilenko (that hideous tattoo on his back) and Argentina’s Manu Ginobili (the bat and exploding shoe).

The draft also introduced us to a player that many had little knowledge about because he came from a country that was in the process of opening itself back up to the world.

With the 36th pick in the NBA Draft, the Dallas Mavericks selected Wang Zhizhi from the Bayi Rockets in China.

That announcement did not exactly stop the presses, but history was made as the Beijing native would go on to become the first Chinese-born player to enter the Association. And from that point the saga of the big man would begin.

It is without question that the Bayi Rockets had a prized asset in the 7-footer and were reluctant for him to go as he was one of the main cogs in the army team’s dominance of the Chinese Basketball Association (the team claimed their sixth consecutive CBA title over the Yao Ming led Shanghai Sharks). However, Wang had to play out his comfort zone and test his skills against the top players on the NBA stage.

The final weeks of the 2000-2001 NBA regular season would give Dallas Mavericks’ fans the chance to see what the hype was all about. In eight minutes of play Wang finished with six points and three rebounds. Not exactly stellar stats, but at least he showed the Dallas faithful he could play.

While the 36-year-old was not an impact player for for the Mavs, the Los Angeles Clippers (where Wang scored a career high 21 points) or the Miami Heat, he would play a role in having NBA teams take a closer look at Chinese players to determine whether they can contribute.

Outside of club basketball, Wang would make a huge impact for China’s men’s national basketball team as they went on to dominate Asia for a decade or so. Two FIBA Asia Championship titles and three Asian Games gold medals are quite impressive achievements to have on his resume and his teammates throughout that period know how much of a role he played in making sure they walked away as champions. This was shown at the 2010 Asian Games in Guangzhou when each one of them places there medals around Wang’s neck as a sign of respect and admiration.

Despite embroiling himself in controversy back in 2002 by not reporting back to the national team after the NBA season and his subsequent ban from the team afterwards, Wang Zhizhi has certainly made up for the transgression to show that he was still an influential player both for the Rockets (winning the 2007 CBA championship over a strong Guangdong Southern Tigers team) and the national team in his return.

As the the Beijing Ducks and the Xinjiang Flying Tigers prepare for Game 1 of the CBA Finals next week, it would be fitting to extend a thank you to Wang Zhizhi for his contributions not only to the league but for basketball in China as a whole.

Wang is certainly a pioneer in the game and hopefully the Rockets or the country’s governing body for basketball will find some way to keep him in the game as he moves on the next stage of his life off the court.