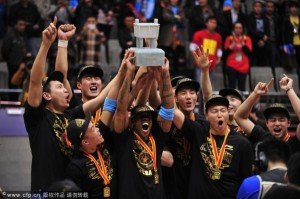 As the final buzzer sounded at the Hongshan Arena on Sunday night an air of euphoria and relief could be seen on the faces of every member of the Beijing Ducks basketball team as they reclaimed their throne atop the Chinese Basketball Association with a 98-88 win over a strong Xinjiang Flying Tigers side to close out the Finals’ series 4-2.

The win gave the capital team its second CBA crown in three years.

Compared with their maiden title victory over last season’s champions, the Guangdong Southern Tigers, this one will go down as the one in which the Ducks had to really dig deep and rely on every player in the squad to contribute.

Some may only focus on the playoff games as being the Ducks’ toughest outings, but if you were to analyze the entire season, their harrowing journey back to the top started when their inspirational leader, Stephon Marbury, went down with a knee injury in December last year.

Questions started to arise as to how the team would progress without the New York native as he has been relied on heavily in his three seasons with Beijing. Despite the doubts, the Ducks picked themselves up and moved forward. One of the key moves they made to keep themselves in good standing over the course of the regular was sign forward Damien Wilkins to a temporary deal until Marbury was medically cleared to return to action.

The team would go on to win 13 of 19 games with the former University of Georgia Bulldog in the lineup to remain in the top half of the standings. Bringing in a replacement player to cover for one of the top stars can be a big risk, but in this case it worked out perfectly. Perhaps one of those gold medals should be sent back to the United States to thank him for his efforts.

One of the more important additions to the team leading up to the season was guard Sun Yue. After playing in the United States with the Beijing Olympians in the minor leagues and the Los Angles Lakers in the National Basketball Association, the native of Hebei Province would make his return to China and sign with the Ducks in 2013.

Sun’s contribution to the team would also help to take much of the pressure on Marbury to score as he would average 13.7 points per game. He would also make some big plays in the Finals to help Beijing towards its second championship.

Add in the play of center Randolph Morris — named the Finals’ Most Valuable Player — along with others players and it can be seen why this team was able to overcome some of the adversity to reclaim the CBA crown, one that wa certainly hard-earned.

While some in the press claim that the Ducks upset the Flying Tigers, that assessment is way off the mark. This is a Ducks team that has been together for a while and has strongly contended for the title in the past three seasons. Their success should come as no surprise to anyone that follows the game in China.

It was grueling journey for the Ducks to reach the CBA Finals, but a rewarding one as many in the city will no doubt celebrate the team’s latest accomplishment.