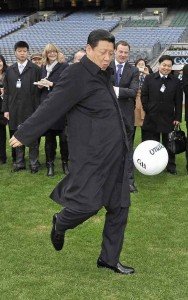 We’d be remiss if not to report about China’s latest sports reform measures. The message first sent out on Sept 3 on CCTV’s most watched news program, Xinwen Lianbo. To everyone’s surprise, the show aired exactly four minutes and eleven seconds of a State Council meeting on China’s industry of sports.

Three takeaways from the meeting：

These, of course, will not be achieved overnight. Even the GAS lifted the regulation on their approving the sports events, we can expect to encounter some bumps on the road in the coming years in this area alone. Big players like the UFC and top European football clubs (I do mean the top clubs, not Guingamp) should be rejoicing over the decision. Small players (companies and organizations) will also be coming in and this could be a blessing and a curse at the same time.

This week, I wrote an article for the Global Times newspaper. The piece is too long for an op-ed in the GT so I would like to publish it in entirety here. It’s really interesting when you compare the two versions and see what’s not covered in the GT piece.

For any follower of the English Premier League in China, the new football season doesn’t come as easy. Starting from the 2014-2015 season, the EPL, arguably the most popular football franchise in China, is no longer free for Chinese viewers.

The change came as Super Sports, the broadcasting-rights holding company in the region, sold online broadcasting rights to LeTV and PPTV, two of the most promising media companies in Beijing and Shanghai, for USD 11 mln each, a fee that 10-15 times as high as in previous years. Counting Super Sports themselves, the EPL now can only be watched through three online channels, and more than half the matches are pay-per-view only.

You may think I’m against the decision. But as someone who has just been through the hectic days of watching the 2014 World Cup on CCTV and its website, I actually applaud and cheer for it. Why? Because with a free market of broadcasting rights, you’d have competitions between broadcasters on- and off-line and eventually a better product for the sports consumers.

So what have I experienced during the World Cup? Well, I paid for a premium package of CCTV’s online streaming and, like many of my fellow countrymen complained, it just didn’t work.

Chinese Internet portals and video sites produced their own World Cup shows but none of them offers live match broadcasting. So there was no computers, tablets or mobile streaming of high-definition games, go get a TV and enjoy the staid commentaries. It’s actually absurd if you put it in context that China now has almost twice as many Internet users as the U.S. has people and over 700 mln smartphone users.

The EPL is nothing like that. The online broadcasters have multiple options in video qualities and feature the best commentators in the country and even offer commentaries in English language and by enthusiastic fans themselves.

So why the difference? Because in 2000, the SARFT (The State Administration of Radio Film and Television), China’s top media regulator, issued a regulation which stipulates that only CCTV, the state broadcaster, can negotiate and purchase broadcasting rights of major international sports competitions such as the Olympics, the Asian Games and the World Cup. The best local TV stations can do are to discuss with the national broadcaster for a possible redistribution of rights. The regulation is so outdated that it didn’t even mention a word about online media platforms.

But all that is about to change. Earlier this month, China’s premier Li Keqiang presided over a meeting in the State Council, the cabinet, which discussed specifically about the burgeoning sports industry in the country. According to the statement released, the decade-old stringent broadcasting rights regulation will be lifted and we can expect a more competitive race in the sector in the coming years just like what’s happening with the EPL deals this year.

What comes out of the meeting could be one of the first measures of the Xi-Li administration to tackle and reform China’s soviet-style sports system. And it doesn’t stop at broadcasting rights.

Another goodwill policy change is for sports events organizers. Companies no longer need to get approval from sports bureaus for holding commercial and public sports events.

For decades, China’s local sports bureaus charge mandatory fees from companies for holding any sports events, big or small. An event will be deemed illegal if a sports bureau doesn’t chop on its paperwork and the organizer can expect a series of inquiries from the local policy bureau, fire-protection bureau, etc. In other words, you have to pay to get it approved, even if the sports leaders don’t help in other areas besides chopping in most cases.

Besides government funding, the mandatory fees are the main income for most local sports bureaus and the decision will no doubt hit them hard.

“For sports bureaus, this doesn’t just mean a shrink in the income and a few job cuts,” Liu Xiaowu, director of the Guangdong Futsal Association, told me. “As the reform goes further and deeper, a whole department of sports administrators could disappear in the future.”

The Guangdong Futsal Association, where Mr.Liu works, has no affiliation with sports government in the province, the first association in the country without government ties. The difference brought Liu controversy in media and his insistence of independent associations never changed.

“In the future, there will only be associations help coordinate all parties for hosting an event,” said Liu. “All the association we see now are acting as a ‘second government’. And this needs to be changed according to decisions made in the 3rd Plenary Session of 18th CPC Central Committee, that we need to transform the government functions.”

“Sports was ideological and considered a means to weiguo zhengguang or ‘win glories for the country’ in the past,” opined Liu. “When sports goes to the market, why should there still be a government institution in charge?”

Sports like football and basketball are highly socialized in the west but are controlled and managed by governmental ‘sports centers’, which lacked both the proficiency and efficiency that are needed in their decision-making.

“No wonder that China’s national football team could lose to Thailand and the North Korea recently and we can expect them to go down further,” Liu told me.

The Guangdong Futsal Super League that Mr.Liu oversees maybe the best example how sports can benefit from little government control. Unlike most of other sports in China, it hasn’t spent a penny of taxpayers’ and yet, in five years since its founding, the league produced 26 players for China’s national futsal team and the best team in the league twice ranked fourth in AFC Futsal Club Championship.

“I think it’s unnecessary to have sports bureaus in this age,” said Liu. “All they do each time when we try to hold an event is making trouble for us.”

The local sports bureau would ask all sorts of questions about their sponsors, whether it’s registered at local Foreign Affairs office for an International event or recognized by international associations.

“I think we made the sports regulators lose face,” Liu analyzed. “They spent a lot of money, sometimes to no avail, but we as professionals produced champions too and made money through commercial events.”

“To me, I think the sports events approval lift is the most important reform in the sector since the Communist Revolution,” said Liu Xiaowu. “When we look back 10 years from now, it maybe a decision that really kaitian pidi or ‘shook the heavens and split the earth.’”

China copied the sports model from the Soviet Union in the past and produced hundreds of Olympics champions funded by the state coffers. The new policy change will likely create efficiency in sports business and further unleash sports and business potential of its people.

It took 13 years for Deng Xiaoping to tour the South and give the go-ahead of China’s economic reform since the country opened up in 1978. We can expect the change in sports come sooner than that and cheer for our sports champions at a lower cost in the future.