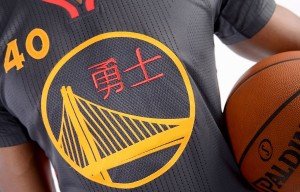 The National Basketball Association, unlike other American sports organizations, has had huge success in China over the past 30 years. Now, two of its teams will honor their fans across the Pacific Ocean with special edition uniforms for the Chinese Lunar New Year.

The Golden State Warriors announced on Monday that they will wear a special uniform to mark the Chinese New Year. On the same day, the Houston Rockets announced that the team would also be wearing commemorative uniforms during the festive season.

The Warriors will wear their special edition uniforms on Feb. 20, while the Rockets will debut theirs on Feb. 21.

Both teams are highly popular in China – the Warriors have 1.5 million followers on Weibo, while the Rockets are well known throughout the country thanks in part to former star Yao Ming playing for them – hope the uniforms will gain them even more fans.

If anyone who knows the value of the Chinese fans to the NBA it is Rockets owner Leslie Alexander who released a statement on the day the uniform was unveiled.

The Lunar New Year uniforms represent a great opportunity to honor our incredibly loyal and passionate fans throughout China. From the time the Rockets participated in the first live NBA television broadcast in China on June 8, 1994, to my selecting Shanghai’s native son Yao Ming with the first overall selection of the 2002 NBA Draft, to our participation in the first NBA China Games in 2004, the Rockets have always enjoyed a very special bond with our fans across the region. We are thrilled and humbled to establish the Lunar New Year uniforms as a way to honor the culture, heritage and historical and future connection we’ll always enjoy with our Chinese fans.

The special edition uniforms should prove to be a popular seller for basketball fans in China as the NBA looks to attract more to the league.