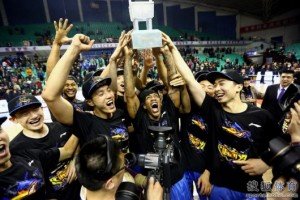 “The real men will rise! The real men will rise,” Beijing Ducks guard Stephon Marbury shouted in the visiting team’s locker room among teammates, coaches and media on Sunday night as the capital team made it back-to-back Chinese Basketball Association titles (and third overall) with a hard fought 4-2 finals series win over the Liaoning Flying Leopards. And the real men did certainly rise as the championship experience of the Ducks came in handy against a determined side from the northeast of China with Lester Hudson, who made it to the CBA finals last season with the Xingjiang Flying Tigers, leading the charge.

The former Georgia Tech Yellow Jacket has far exceeded expectations since he first signed with the Ducks in 2011. Now at 38 years old, when most professionals basketball players consider hanging it up, he has proved the critics wrong by putting on a well-deserved MVP performance. And to make the critics eat more crow, his prophecy of his team becoming a dynasty is becoming reality.

Out of the three championship series wins for the Ducks, this one had to be their toughest one to earn – and that is saying a lot as they had to go through a battle with a talent-laden Guangdong Southern Tigers team in the 2011-12 season, which they walked away with a 4-1 series win.

Liaoning did not feel the slightest intimidated taking on the reigning champions, and Hudson proved to be too much to handle as every drive to the basket and three-pointer made kept them close in every game. However, for every bucket the CBA’s regular season MVP scored, Marbury would follow suit with a play of his own. The most impressive display came in Game 3 at the MasterCard Center before a pro-Ducks crowd. Down 14 points in the fourth quarter, Marbury showed the guile of a seasoned veteran to get his team back in the game and eventually win it by a score of 111-110 thanks in part to Liaoning’s big man Han DeJun missing the second of his two free throws in the dying seconds.

The media will talk for days about the performance of the former NBA All-Star guard, but he certainly could not have done it all on his own. Fellow foreign import Randolph Morris, who earned Finals MVP honors last season, continued to show how important of a factor he is for team’s inside game as he averaged a double-double (20.8 ppg and 12 rpg) throughout the course of the playoffs. Chinese teammate Sun Yue also contributed with his 15 points per game average as well. And the performances of players such as Li Gen, Wang Xiaohui and Zhai Xiaochuan were also critical at certain points of the series.

The Ducks will enjoy retaining their CBA crown for now, but the questions will turn to next season and whether they can go for the three-peat – a feat accomplished by the Bayi Rockets and Guangdong. It would be very hard to doubt Marbury and his teammate’s chances again as they proved that the real men will rise when the time calls for it.