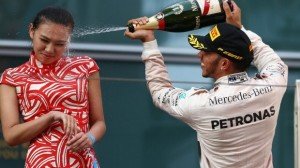 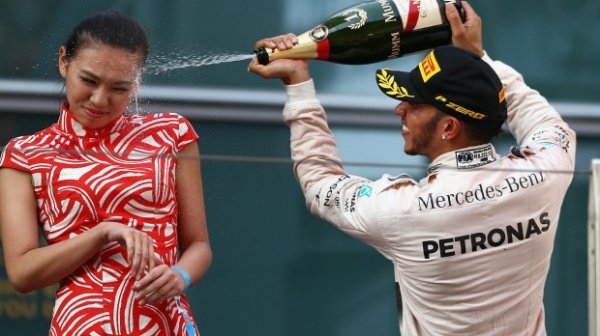 Lewis Hamilton’s win at the Chinese Grand Prix has been marred by his controversial action of spraying champagne in the face of a hostess (Getty Images).

Formula One world champion Lewis Hamilton should be basking in the glory of winning the 2015 Chinese Grand Prix on Sunday, but he has found himself in hot water for his actions at the awards ceremony as he celebrated by spraying champagne in the face of a hostess.

Photos of the 30-year-old Brit show him at point-blank range firing the bubbly in the face of the helpless hostess, 22-year-old Liu Siying, who smiled somewhat reluctantly.

Since then Hamilton has received vehement backlash, primarily from anti-sexism groups, as well as some support.

I thought Formula One was a gentlemanly sport but that photo of Lewis Hamilton opening the champagne bottle onto a woman’s head is so AWFUL. (@thereadnz)

Total pig, should be tarred & feathered: #LewisHamilton sprays hostess in the face with champagne (@TweetErinne)

Whatever the reaction and no matter how many people demand an apology from Hamilton, it may seem like it will not come any time soon seeing that this is not the first time he has done this act.

It appears he has more pressing issues to handle like the ongoing spat between him and Mercedes teammate Nico Rosberg.