It’s no secret that although Macau’s casinos give off an aura of prestige and affluence, deep down the industry on a whole is bent-over-double writhing in pain from its dismal revenues.

However, that doesn’t mean the poker scene in Macau isn’t thriving – in fact, it’s performing better than ever. Poker in China has always been revered (albeit it on a niche level) and for one professional, the last couple of years have been a real eye opener.

Celina Lin was born in Shanghai and started her poker career in 2004 when she appeared in a tournament at the famous Crown Casino in Melbourne, Australia. After becoming completely infatuated with the game, she then turned to online portals in an attempt to create a bankroll that would allow her to play at a professional tournament.

After three weeks of continuous online action, she managed to raise $10,000 for buy-ins at live games, and well, the rest is history as they say. She has won two notable tournaments and has become a regular fixture in Asian tournaments building up quite a reputation along the way. Her biggest win was at the Macau Poker Cup Red Dragon Event where she won a sizeable $110,000 in front of a sold out crowd. 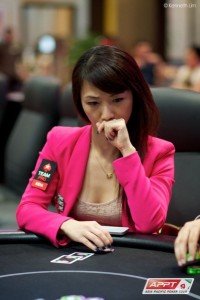 Celina pondering over her next move

Regardless of the industry posting discerning financials of late, Lin is confident about the coming years in Macau. She feels that poker is drawing in people from around the world, and the prize pools these tournaments are commanding has never been larger.

In an interview with Business Insider she told journalist Stephanie Yang: “Poker attracts a different segment of people than those who have historically come to play baccarat or other table games.” And although this isn’t attributing to an increase in revenues from the casinos, it is helping improve the popularity among locals and slowly increasing tourism.

But she’s also encouraged by her own personal development in the sport, which has seen her climb the rankings at national level. Global Poker Index now has Lin ranked as the 2nd best player in China. All of this she attributes to the online development she had in the beginning of her career which allowed her to play without emotion – a trait that she tries to implement today at live tables.

In the online domain she managed to learn not only control her emotions while playing poker but also she found it a great way to manage her money. And even some of the biggest online sites help players with money management, regularly publishing articles on the subject. InterCasino published an interesting article documenting the major aspects a player must consider to ensure optimal performance during long sessions. It’s advice like this that Lin found extremely useful and now attributes her meteoric rise in the sport too.

It’s evident that not everything is doom and gloom in Macau. With shining lights such as Lin regularly huddled round one of the Venetian’s professional tables, and a host of poker superstars frequently making the trip to the city to feature in tournaments, even if their balance sheets aren’t showing it, poker is on the up in Macau. And Lin hopes to be at the forefront of it for many years to come as the Queen of Poker.

Tags: Celina Lin, Macau, poker
From: Sports
No comments yet