Almost Is Still Newsworthy in Tennis

An article looking at the latest tennis duo from China, and how some of the world's less-reported sports are producing China's future athletic stars.

For all of about five seconds, there was discussion about an "all Chinese" final in the Australian Open. The People's Daily newspaper had already crowned Li Na and Zheng Jie — the Chinese female tennis players who both managed to advance into the final four to play against Serena Williams and Justine Henin, respectively — "two golden flowers."

END_OF_DOCUMENT_TOKEN_TO_BE_REPLACED

Chinese snooker star Ding Junhui beat John Higgins 10-8 in the final of UK Championship, snooker’s second-biggest ranking event on Sunday night, and part of his prize was 69 kilos worth of sponsor's pies.

END_OF_DOCUMENT_TOKEN_TO_BE_REPLACED

Chinese ace Liang Wenbo is determined to continue the brilliant form he showed at the Roewe Shanghai Masters into next week’s Grand Prix qualifiers. 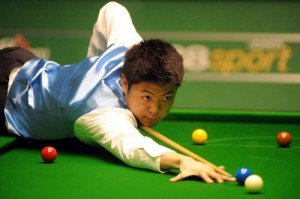 The 22-year-old left-hander went all the way to the final in Shanghai last week, beating former World Champions Peter Ebdon and Shaun Murphy, as well as fifth seed Ali Carter and Ricky Walden, who won the title last year. He eventually came up short against Ronnie O’Sullivan, losing 10-5, but was still thrilled with his performance.

“I had the best week of my snooker career so far in Shanghai,” said Liang, whose only previous appearance in the quarter-finals of a ranking event was at the 2008 World Championship, when he lost to O’Sullivan. “It was really exciting and it’s given me a lot of confidence for the rest of the season. Beating four top players, who have all won ranking events, has helped me prove to myself that I belong at that level.”

The Grand Prix qualifiers at Pontin’s in Prestayn run from Monday to Thursday (September 21-24) with 80 players battling for 16 spots, to join the world’s top 16 in the televised stages at the Kelvin Hall in Glasgow from October 3 to 11.

The likes of Steve Davis, Jimmy White, John Parrott, Ken Doherty, Graeme Dott, Jamie Cope and Judd Trump will be among those competing at Pontin’s.

Liang, whose attacking style of play has earned him a large following among Chinese fans, needs to win one match to qualify, and plays at 4pm on Thursday against Dominic Dale, Jin Long, Ben Woollaston or Zhang Anda.

“I want to go on to the qualifiers next week, keep my good form going and try to win my match and make sure I will be at Glasgow, as I know the Grand Prix is one of the most important tournaments,” said Liang, who comes from the Heilongjiang Province in China but is based during the season at the World Snooker Academy in Sheffield. “I will keep working hard on my game at the Academy , and hope I can earn some success for myself and for Chinese snooker.”

2009 World Snooker China Open Is around the Corner

Good news for snooker fans here, tickets for the 2009 Honghe Industrial World Snooker China Open went on sale today at Emma Ticketmaster (h/t The Beijinger Blog). The tournament will be playing from Mar. 30 to Apr. 5 at the Beijing University Gymnasium (北京大学生体育馆). Full fixture after the jump.

Chinese player Ding Junhui (丁俊晖), ranked 11th, will play Michael Holt/Xiao Guodong(肖国栋) in the first round. And to reach the Quarter Finals, he will have to take down Ronnie "the Rocket" O'Sullivan/Fergal O'Brien. Tough draw for Ding but good for us fans.